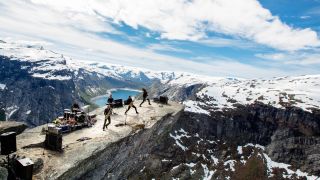 Jørgen Munkeby (right) is a great one for epiphanies. A major one happened in 2010, when Shining – the Norwegian band he’d been leading for over a decade – released an album called Blackjazz. It was a culmination of everything that Munkeby had been working towards since his youth, making successful bedfellows of two unlikely suitors – metal and jazz. So distinctive was it that the term ‘Blackjazz’ even came to signify a peculiar new genre.

Shining then went on to refine the formula on 2013’s equally formidable One One One. “For a lot of people, Shining came into existence with Blackjazz,” posits Munkeby.

“If you want to dig back into our history then that’s good, because it puts everything into perspective. But
if you’re only interested in the music from Blackjazz until now, that’s also fine, because I think that’s when something unique started to happen. We’d arrived at something and started to become impressive.”

Shining’s journey to this new hybrid was little short of remarkable. Having started in 1999 as an acoustic instrumental jazz combo, the band moved through prog, hard rock, electronica, classical and avant-garde styles, absorbing and shedding influences at a steady rate of knots. This processional approach was reflected in the turnover of musical personnel. Members came and went, with guiding force Munkeby the only constant. Now his vision has reached its fullest expression on Shining’s latest album, International Blackjazz Society. It’s an often ferocious tear-up between punishing metal and free jazz, with Munkeby’s saxophone runs providing much of its exploratory, abrasive texture. In the true spirit of prog, the record also comes with its own conceptual manifesto: the promotion of an age dedicated to life, liberty and the pursuit of Cultural Excellence.

Metal music can be very spiritual. It’s more about mood and atmosphere than technique. So metal and jazz can be very similar.

“It’s like a cult or sect thing,” he explains. “This is an organisation with several membership levels and
a world domination plan. Though whether it’s physical domination, or more about spreading cultural excellence, isn’t easy to tell. But that’s really the idea of it. It’s serious and fun at the same time.” (You can find out more, if you’re so inclined, at www.blackjazzsociety.org.)

Munkeby’s first love, as a young teen in the early 90s, was thrash metal. Rather than pick up a guitar, he opted for a saxophone: “When Pantera’s Vulgar Display Of Power came out [in 1992], I remember playing the saxophone to that album in my room. It probably sounded shit, but it felt natural to try to make those two worlds go together. I didn’t even like jazz at first. I thought it was just some guy playing sax in a bar or something clichéd like that. Then I discovered John Coltrane.”

The impact of Coltrane, especially 1964’s Crescent, was a major epiphany. “He was my big hero,” says Munkeby. “There’s a lot of shredding going on in metal music, which is easy to do on the saxophone. Blowing hard can create
a very aggressive sound that kind of resembles a distorted guitar. It has to be cold and hard. In his later years, Coltrane would take three or four long, feedback-like notes and keep repeating phrases, which really works too. In a way, some metal music – even black metal – can be very spiritual. It’s more about mood and atmosphere than technique. So metal and jazz can be very similar.”

Munkeby studied jazz at the Norwegian Academy of Music and began his career with experimental outfit Jaga Jazzist in 1995. Eager to strike out alone, he booked himself a gig in Oslo before he’d even assembled a band. His solution was to hastily recruit fellow Academy students Torstein Lofthus (drums), pianist Morten Qvenild and double bassist Aslak Hartberg. The latter was chosen simply because he wore the coolest clothes. The resulting show, in a local library, was so raucous that they were never asked back. Nevertheless, the first incarnation of Shining was born.

It also marked the beginning of a creative restlessness that has driven the band from the wild acoustic exertions of 2001 debut Where The Ragged People Go through to the heaving art rock of In The Kingdom Of Kitsch You Will Be A Monster (2005), the more proggish Grindstone (2007) to the intense distillation that was Blackjazz and their most recent album, 2013’s One One One. “That restlessness is just a part of who I am,” says Munkeby. “Previously we’d lumped together all sorts of influences. We had distorted guitars, art-metal droney things, contemporary classical percussion stuff, church organs, synthesisers, mellotrons and vocoders. It was fun but it didn’t make a clear statement.”

There’s always been a very strong prog element to the music Shining make: fluid time signatures, fusionist ambition and an utter disregard for the normal conventions of song structure. Not to mention their epic cover of King Crimson’s 21st Century Schizoid Man, the closing track on Blackjazz. Munkeby has a very subjective opinion on the prog that moves him: “I was born in 1980, so my generation didn’t really listen to King Crimson or Rush or anything of those people, though I’ve listened to them in recent years, trying to fill in the holes. My musical history is more about progressive metal bands such as Death. Their later albums have a lot of jazz and progressive elements. Cynic [90s US band] was another band that I remember from my youth, and in later times The Dillinger Escape Plan. But yes, it’s also natural to mention King Crimson or Mike Patton, because there are a lot of similar links. We have the same influences. There are only so many ways that you can combine apples and oranges.”

For all this talk of similarities though, Shining have hit on something highly singular with their self-styled blackjazz. Munkeby hopes that the new album will help broaden the reach of this noisy fusion and maybe foster its own attendant scene.

“In the vinyl artwork for International Blackjazz Society we have three different world maps, three different stages,” Munkeby explains. “In one of them you can see the way blackjazz is moving to take over the world. A lot of new art forms have started that way. We want to help create a new movement.”

International Blackjazz Society is out October 16 on Spinefarm. See www.shining.no for more information.