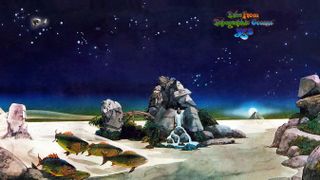 The cover of Tales From Topographic Oceans

Yes will reissue their 1973 double-album Tales Of Topographic Oceans on September 26.

The package, overseen by producer and Porcupine Tree mastermind Steven Wilson, will be available in 3CD/Blu-ray or 2CD/2DVD. The Blu-ray edition contains a complete alternate version of the album using live tracks and studio run-throughs and another full album, featuring sides one and three from the 2003 Rhino CD.

Both editions will also include unedited and extended version of track Dance Of The Dawn, five new single edits, updated liner notes from Sid Smith and new interviews with Jon Anderson, Alan White and Steve Howe – along with rare photos, memorabilia and expanded session notes.

The promo follows their Album Series tour, with dates scheduled throughout the summer and wrapping up in San Diego’s Humphreys venue on September 4.

The reissued Tales Of Topographic Oceans can be pre-ordered on Steven Wilson’s website.

Meanwhile, Yes drummer Alan White has been forced to take time away from the band’s current tour after undergoing urgent back surgery. He has been replaced by stand-in Jay Schellen, who’s previously played with Asia.

Their tour continues across North America.