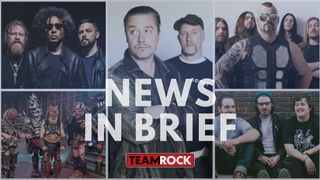 Here is TeamRock’s roundup of all the news snippets from around the world of rock and metal on July 26, 2016. Compiled by our news team at TeamRock HQ. For today’s regular, more in-depth news stories, click the ‘News’ tab in the menu above.

Sabaton have parted ways with their guitarist Thobbe Englund.

He’ll play alongside the band one last time at their Sabaton Open Air festival in their hometown of Falun, Sweden, on August 20 to launch their latest album The Last Stand.

Englund reports he’s leaving to pursue other projects and “follow the heart.”

He adds: “I have in recent years become more aware of what would make me feel real happiness and content, and that is to expand my own creativeness in combination with a somewhat stiller life, where I will not tour all year round at the speed of light.

“During the many years of touring with Sabaton, we have become like brothers. Together with the best crew in the world, we’ve had a true blast and there is a bond between all of us that cannot be broken.”

Sabaton, who have yet to name a replacement for Englund, have a number of European dates scheduled next month.

Giraffe Tongue Orchestra have released an acoustic video and a Q&A session online.

DuVall said of their upcoming debut album Broken Lines: “Writing lyrics for these songs was somewhat like writing for film – the mood shifts rapidly and drastically within a song.

“Sometimes the whole scene changes. There were a lot of times where, if you were trying to impose conventional rock songwriting standards on this, you’d be in a whole world of trouble.”

Broken Lines will be released on September 22.

Faith No More have announced that they’ll reissue deluxe editions of 1995’s King For A Day… Fool For A Lifetime and 1997’s Album Of The Year later this year.

The pair of albums will be released on September 9 and will feature new remasters of the original record along with a bonus disc of b-sides and rare tracks.

They’ll be made available on 2CD, 2LP 180g vinyl and via digital services and are available for pre-order via Amazon.

Gwar to release their own brand of vodka

Gwar have announced that they are to release their own brand of vodka.

The band have teamed up with the James River Distillery for the release of Arctic Snow.

The group say: “The band and the distillery have produced a potato vodka that is sure to please Bohabs and civilians alike. Arctic Snow is 80 proof and distilled four times for the perfect balance of flavour and smoothness.

“It gets you drunk too. It will be making its debut at GWAR B-Q on August 20 and will be available at James River Distillery’s store thereafter.”

The band’s annual event will be held in Richmond on August 20.

Modern Baseball have announced a short tour around their appearance at the Reading and Leeds festival on August 28.

They’ll be supported on the dates by The Winter Passing and Vicky Speedboat.

Modern Baseball have set up the run of shows in support of their recent album Holy Ghost, which was released in May.