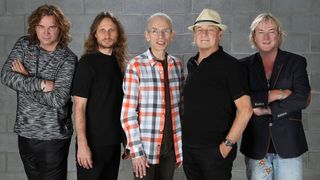 Yes drummer Alan White has been forced to take time away from the band’s current tour after undergoing urgent back surgery.

He was diagnosed with a damaged disc after seeking attention for an “intense pain” that began while they were on the road in Europe earlier this year.

During his recovery from the procedure, which took place in Seattle, Washington, he’ll be replaced by stand-in Jay Schellen, who’s previously played with Asia.

White says in a statement: “After working with European and American doctors, spinal specialists, exploring optional treatments, I’ve had no choice but to undergo surgery.

“I’m pleased to announce a very positive result from this procedure. With some rest and physical therapy, I should be back in good form and ready to rejoin the tour in the near future.

“I’m eager to be on the road with the band – but also need to ensure my recovery is complete before doing so.”

He says of Schellen: “Please welcome him to our Yes family. He’s doing a great service by stepping in last-minute, so as to not disappoint everyone.”

White says he’ll return to work “as soon as physically possible” and adds his thanks for fans for their support.

Yes’ tour continues across North America on July 25, with Billy Sherwood in place of late bassist Chris Squire. The shows include performances of their albums Drama and sides 1 and 4 of Tales From Topographic Oceans. Two of their recent UK gigs included guest appearances from former member Trevor Horn.

Yes: Alan White broke his ankle at a roller disco with Richard Branson