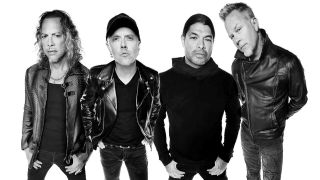 When Kirk Hammett lost his phone containing hundreds of song ideas he also lost the chance to contribute much to Metallica’s upcoming album, he’s revealed.

The guitarist had recorded more than 250 riffs onto the handset before it went missing in 2014, but he’d never backed them up.

And it meant he wasn’t able to bring those ideas to the table as the band wrote Hardwired… To Self-Destruct, which will be released in November.

Hammett tells KISW 99.9: “It was devastating for me. I had to start at zero again while everyone else had material for songs.

“By the time I got a few ideas flowing and formed, most of the songs were already written.”

He forced himself to look on the bright side: “I had to think, ‘Okay, I have stuff – but it looks like it’s going to make it onto the next album.”

Hammett recently said he refused to read any online comments about latest track Hardwired. But he did watch the video released this month featuring kids listening to Metallica for the first time.

“I loved it,” says the guitarist. “The one kid who kept saying, ‘This sounds so familiar,’ I love that, because maybe he heard Metallica as a toddler or something.

“It made me think. Not only did we have a reaction for him, but we were confusing for him. I loved that aspect.

Hardwired… To Self Destruct arrives on November 18. Metallica tour South America in October, with many more tour dates to be announced in due course.