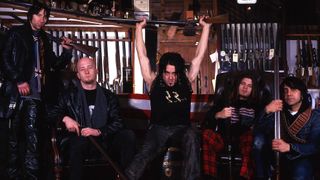 Slipknot, Machine Head, Megadeth, Trivium, Sepultura, Killswitch Engage… erm… Nickelback? If there is one record label that has provided metal with its biggest bands, then you’d be hard pressed to find a more impressive roster than Roadrunner Records’. Of course when you strike gold with such regularity, it’s obvious that a few great albums are going to slip through the net. So here are the ten best lost albums released on Roadrunner Records.

It probably wasn’t a great idea for Roadrunner to sign a Dutch techno DJ to their roster alongside Type O Negative, Fear Factory and Deicide, but Saturday Teenage Kick is a real riot of an album. And the fact that it sounds dated as fuck in 2016 only adds to its cartoonish charm. The irresistible wah-wah guitar and clipped rapping vocal by Patrick ‘Rude Boy’ Tilon on Billy Club will get you dancing… if you’re into that kind of rthing. Junkie XL went on to remix that Elvis tune. Yeah, we’re not so cool with that.

3 Inches Of Blood – Advance And Vanquish

Due to the label’s mid-90s golden period, many people associate Roadrunner as being a nu-metal label. This, of course, ignores the fact that they released albums by Annihilator, Mercyful Fate and King Diamond in their early years. And in 2005 they released this absolute belter of an album by Canada’s 3 Inches Of Blood. Taking classic Judas Priest, punk rock and the fantastical power metal lyricism of Dio, it was unlike anything else in the scene at that point. It was so odd that many people believed that 3IOB were taking the piss, something they strenuously deny. We don’t know, but we do know that Cam Pipes’ and Jamie Hooper’s helium vocals and Sunny Dhak’s melodic leads on opener Fear On The Bridge had us straight away.

Coming from the same Umea scene as Cult Of Luna, and also sharing members over the years, Khoma were not your typical Roadruner band. But when their promising debut album Tsunami saw them ink a deal with the label, there was suddenly much anticipation from the underground that Khoma could take post-rock into more mainstream territories. Okay, it didn’t happen, but that’s no reflection on the quality of The Second Wave. This is far more emotionally open than a band like Cult Of Luna, with vocalist Jan Jamte a million miles away from most of his noise making peers. His glacial voice is the instrument that carries the band along. Opening track The Guillotine was almost a minor hit, being used in the American remake of The Girl With The Dragon Tattoo, but sadly the band quickly vanished back underground.

As the New Millennium arrived, a whole host of new bands began to take more traditional sounds, ramp up the heaviness and bring it back to the metal scene. We all know about Lamb Of God, Killswitch Engage and the rest of the New Wave Of American Heavy Metal movement, but there were others that didn’t quite make the same impact – even if the music was still ace. 36 Crazyfists are still with us today, and they’re still a great band, but you can’t help but when listening to A Snow Capped Romance you can’t help but wonder why they aren’t way bigger. Brock Lindow has melody and brute force in his voice, the band are way more capable and complex than most of their peers and they arguably bridge the gap between the NWOAHM and nu-metal bands better than anyone.

Possibly the most intense album that Roadrunner released in the late ‘90s (yeah, even including Slipknot). LA punks Amen were the right band at very much the wrong time. In a world of chain wallets and braided goatees dyed blue, they were the sound of unrestrained, righteous fury with no interest in ‘jumping the fuck up’. Songs like Coma America, When A Man Dies A Woman and TV Womb were as bleak and nihilistic as punk rock had sounded for a long time. After its released they soon got chucked off of a tour with Slipknot, Coal Chamber and Machine Head for being too reckless onstage. Listening back to this today, you can imagine why.

The Workhorse Movement – Sons Of The Pioneers

Another oddity from the nu-metal era. One day, The Workhorse Movement just appeared out of nowhere, complete with sharp suits, massive pierced bits, and some absolutely absurd facial hair. You’d not be blamed if you took one look at them, rolled your eyes and placed them in the bin with Ultraspank, Godhead, The Union Underground and the rest of the third generation rap-metal hangers-on. But Sons Of The Pioneers has got way more going for it than that. Yes, there is the big bounce obsession of that time, there’s also some dual, white boy rapped vocals as well, but this album has some thunderous stoner rock riffola and enough of its own charm and personality to stand away from the crowd. Whack on their anthemic Keep The Sabbath Dream Alive for proof.

Off the back of three genuine Sepultura classics in Beneath The Remains, Arise and Chaos A.D., Max Cavalera’s stock couldn’t be much higher. So when he teamed up with Alex Newport from Nottingham noise band Fudge Tunnel, metal fans expected something special. And they got it. Point Blank is a frightening record, with Cavalera’s love of early death and thrash metal being amped up and combined with Newport’s ear for industrialised, avant-garde extremity. Wasted Away has become an underground classic, and song like Cockroaches and Blind And Lost still sound as heavy as anything you care to mention today.

Featuring a cast of luminaries from hugely respected New York bands like Judge, Better Than A Thousand and Youth Of Today, Shelter are the only band on our list who can say they legitimately invented a whole new sub-genre. The super positive, melodic punk that Shelter played was soon coined as Krishnacore, thanks to frontman Ray Cappo and guitarist Porcell’s conversion to Krishna Consciousness (aka Hare Krishna). Mantra is a perfect summer album, full of fizzing, fist pumping anthems; Civilised Man and its bouncing groove, the breakneck punk of No Appreciation and their biggest hit Here We Go. They should have been massive.

Life Of Agony were always the curios of the New York hardcore scene. Their music was too melodic, and lyrical content too vulnerable, for them to sit easily with Agnostic Front or Madball. Despite this, the heaviness of Joey Z’s guitar and the band’s excellent live shows meant they were certainly considered part of that movement. Until Soul Searching Sun came along, that is. Showcasing a larger yet restrained musical canvas, songs like Heroin Dreams, Desire and My Mind Is Dangerous were written with vocalist Keith (now Mina) Caputo’s stunning voice in mind. Less instant or heavy as any of their other albums, but it’s also the first time the band really let Caputo soar.

Open Hand – You And Me

Open Hand were a fairly non-descript post-hardcore band before they decided to change direction on their Roadrunner debut (which was actually released through their deal with Trustkill Records, but we’re counting it as part of the Roadrunner family here). On You And Me the band changed direction to incorporate a more riff-heavy, desert rock style. There are touches of Queens Of The Stone Age in Her Song and the title-track, and nods to the more ambient, trippy end of Josh Homme’s Desert Sessions project on the bonged out Tough Girl. But the final track Hard Night is where Open Hand nailed everything, a four minute epic that manages to recall Thrice, Fu Manchu and Tool and also include a sample from John Carpenter’s cult movie Big Trouble In Little China. For everyone depressed that QOTSA’s Lullabies To Paralyze didn’t deliver that same year, this was the perfect tonic.

The essential guide to Cacophonous Records

Why Holy Roar Records still fight for the underground