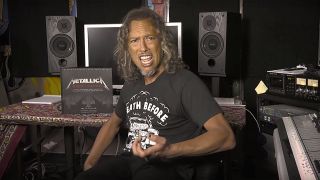 Metallica guitarist Kirk Hammett has recalled being attacked with a pig’s head and a ham sandwich while playing the Monsters Of Rock festival at Donington in 1985.

And he’s told how the moment came to be immortalised in the album artwork of classic album Master Of Puppets.

He lived through the experience soon after he’d become a vegetarian, which made it all the more unpleasant for him.

Speaking in a video that promotes their book Back To The Front, documenting the making of Master Of Puppets, Hammett says: “Someone threw a pig’s head up on stage. I couldn’t believe it. someone actually went to a butcher’s shop, got a pig’s head, put it in some sort of receptacle, drove, carried it into the show and waited for the moment to launch that pig’s head.

“I remember seeing it flying through the air and it landed by Cliff. Cliff didn’t even notice, but I noticed immediately – being a vegetarian you notice things like that.

“Right when I thought, ‘What’s going to happen next?’ my guitar got plastered with a devilled ham sandwich. I knew it was devilled ham because I could smell it, and like I said, I’d just become a vegetarian.”

He played on while thinking angrily: “My guitar smells like devilled ham – this is killing me!” while his roadie and photographer Ross Halfin looked on from the side of the stage.

Hammett adds: “I remember looking over to my guitar tech, who was laughing, and Ross Halfin was standing right next to him, and Ross took the shot. That’s the shot that’s on the back of Master Of Puppets.”

The deluxe edition of Back To The Front is available via Moonrise Media. Metallica release 10th album Hardwired… To Self-Destruct on November 18, and plan to add many more dates to their tour schedule, which currently includes a run of South American shows.