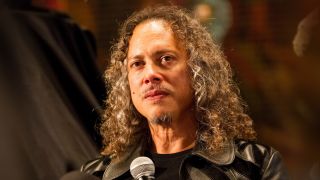 And he’s still hoping the handset will turn up, six months after he mislaid it with rough recordings in its memory.

The band are currently writing the follow-up to 2008’s Death Magnetic, and bassist Robert Trujillo recently described the work as “unique but still heavy.”

Hammett tells The Jasta Show: “I lost my iPhone with 250 ideas – and I was crushed. It didn’t get backed up.

“I was bummed for about two or three days. I’m still looking for it to this day. It still might turn up.”

He says of the riffs he lost: “I can only remember, like, eight of them. So I just chalked it down to, ‘Maybe it just wasn’t meant to be,’ and I’ll just move forward.”

And he adds: “All you musicians out there who use your phone, make sure it’s backed up, right?”

Hammett also reveals that producer Greg Fidelman is working with Metallica on the album, although he may not take on the production role in the end. “We love working with him,” says the guitarist. “His attitude is so right-on. He’s not a ball-buster, but he is a slave-driver.”

Last week, he suggested the thrash icons’ long-awaited album might explore a more “progressive” direction than previous outings. Now he adds: “I can say if there’s any album I can compare to, it’s Death Magnetic. The stuff that’s coming up is super-riffy, super-heavy.”

Metallica return to the UK to headline the Reading and Leeds festivals in August.