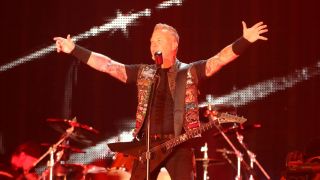 The festival was set up in 2012, with free tickets allocated to people dedicated to fighting world poverty through their actions, such as signing petitions.

The thrash giants will be joined at the annual event by a wide range of artists, including Rihanna, Kendrick Lamar, Demi Lovato and Major Lazer on September 24 (Saturday).

Organisers say: “While we wish everyone could come to the 2016 Global Citizen Festival, we want everyone to see the incredible impact Global Citizens have made to enact policy change from leaders around the world.

“So this year, we’re bringing you a livestream of the show along with a behind-the-scenes commentary and backstage access with our live blog.”

The stream will be broadcast in the US via MSNBS, the festival’s Facebook page and on YouTube from 3pm EST.

Metallica are gearing up to launch their 10th album Hardwired… To Self-Destruct on November 18. They previously released the track Hardwired and announced a run of Latin American dates which kick off in Puerto Rico on October 26. A deluxe edition of the album was recently announced featuring bonus tracks including 2014’s Lords Of Summer.

Metallica’s show at US Bank Stadium in Minneapolis last month was broadcast globally.

Metallica release Back To The Front teaser video