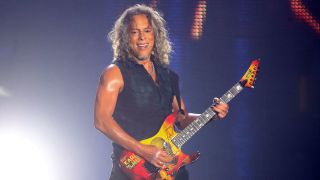 No comments: Hammett on stage in Minneapolis (Image credit: Getty)

Metallica guitarist Kirk Hammett refuses to let himself read online comments about latest track Hardwired, in case they make him feel as if he shouldn’t have bothered recording it.

He’d rather preserve the “great buzz” he has about the song, which will appear on 10th album Hardwired… To Self Destruct when it arrives on November 18.

The band debuted Hardwired on stage in Minneapolis at the weekend, just five days after they’d first played it together.

Hammett tells 93X: “I feel the excitement, the energy in the air. We’re all kind of picking up on it. I’m getting a tremendous amount of texts from friends, saying, ‘Great song! Wonderful song!’

“But as soon as I go on to my computer I think to myself, ‘Should I read what other people are saying? Should I read some comments?’

“I instantly say to myself, ‘Don’t go there.’ Because I’ll get angry, then frustrated, then confused – and then want to write it all off as just fucking useless bullshit. ‘Why did I even waste my time?’

“Having said that, I know there’s a great buzz out there and I’m totally thankful that the song is so well-received.”

Drummer Lars Ulrich recently said that Metallica would begin “pretty extensive” touring duties in January. Hammett reports: “Going out and playing shows is really fun for us. But over time, the mileage we have on ourselves, on our personal odometers, they’re way up there.

“We have to take care of ourselves. We have to make sure that, going into this next little phase, that we do it correctly, and we do it in a healthy way that ensures much more longevity.

“It really feels like we’re climbed the summit and we’ve reached the peak, and now we can just cruise for a while.”

Hardwired… To Self Destruct will be released via Metallica’s own label Blackened Records. Frontman James Hetfield recently said of the business development: “As if we don’t have enough going on! We finally own our own masters. We can put music out our way. We even bought our own record press, over in Germany.”

The Good, The Bad and The Ugly: The Best Reactions To The New Metallica Song