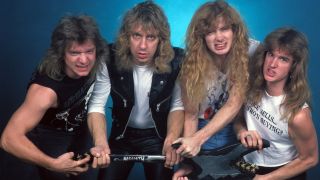 Former Megadeth lead guitarist Chris Poland has recalled how it “hurt” to hear Metallica’s Master Of Puppets because the production was so much better than on his own band’s Peace Sells… But Who’s Buying?

The two seminal thrash albums celebrate their 30th anniversary this year and Poland says that, while he is proud of Megadeth’s second album, he always wished they could have matched the production quality that rivals Metallica achieved on their third effort back in 1986.

Poland tells Joel Gausten: “I really like all the songs, it was a real strong record. My only qualm was, I know we were playing a lot different style than Metallica, but the production on Master Of Puppets was just so good that it just hurt every time I listened to it.

“Both records came out at the same time, and it was like, ‘If we could have gotten that vibe and that sound with our production…’ I’m not sure we could have, because you get what you get, you are what you are.

“The mic’s on, it only records what you give it. Maybe we weren’t sonically in the same cool space those guys were at the time, guitar-wise and recording technique-wise.

“I think honestly, Peace Sells… and Master Of Puppets are the two best records of that whole era.”

Poland also recalls the friction that still existed between Megadeth frontman Dave Mustaine and his former Metallica bandmates at the time.

He says: “I really didn’t know any of those guys. Because of this whole feud, every time they were near me or whatever, I was just like, ‘Well, I don’t know. Should I go talk to them?’

“I really wanted to talk to James Hetfield about tubes and tone and how you do this and that, but I just never did.”

Metallica bassist Cliff Burton died in a tour bus accident in September 1986 and despite his soured relationship with his old band at the time, Mustaine took Burton’s death very bad.

Poland says: “Dave took that so hard. That was really rough on him, because those guys drove to rehearsal together. He was out of it for days, just crying constantly.”

Poland left Megadeth in 1987 and currently works with his band OHM.

This week, Mustaine said he had heard Metallica’s new single Hardwired but he refused to say what he thought of it.