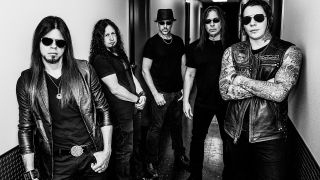 Queensryche have released a video for their new single Light-years.

It’s the latest material taken from the band’s album The Verdict, which was released at the beginning of March via Century Media Records.

Queensryche previously released Man The Machine, Dark Reverie and Blood Of The Levant from the follow-up to 2015’s Condition Human.

Bassist Eddie Jackson says: “We're very excited to unveil our new video for the song Light-years, from our new album The Verdict.

“It was directed by David Brodsky and Allison Woest of MyGoodEye Music Visuals.”

Speaking previously about the new album, guitarist Michael ‘Whip’ Wilton said: “The Verdict is the most metal and the most progressive record we have made in a long time. I couldn't possibly be more excited for everyone to hear this.”

Queensryche are current on tour across the US and will return to Europe this summer for further shows, including sets at Germany’s Wacken Open Air and the UK’s Bloodstock.

They'll also set sail on the Norwegian Jewel with Megadeth on the inaugural Megacruise in October, which will leave from Los Angeles and travel to San Diego and Ensenada.