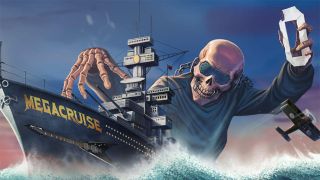 US metal stars Megadeth have added a further six artists to their inaugural Megacruise which will set sail later this year.

The music cruise will take place onboard the Norwegian Jewel between October 13-18. It’ll leave from Los Angeles and travel to San Diego and Ensenada.

It had been previously been revealed that Armored Saint, Anthrax, Devildriver, Corrosion Of Conformity, Testament, John 5, Doro, Beasto Blanco, Metalachi and Metal Church would join them on the high seas.

Now Megadeth have confirmed that Suicidal Tendencies, Queensryche, Death Angel, Sacred Reich and Toothgrinder have been added to the bill.

In October last year, Megadeth’s Dave Mustaine told Eddie Trunk on SiriusXM that he’d like to book a Megadeth tribute act for the event, saying: “We're gonna try and find a cover band that does Megadeth songs and let people go out there and just sing them.”

And it appears that they’ve found one in the shape of MecaniX.

A statement reads: “Joining us all the way from Montreal will be MecaniX - Tribute To Megadeth. Not only will they be performing, but they will be part of an amazing event created by the Captain, Dave Mustaine!

“One lucky cruiser will join Megadeth on stage during the cruise. This will be an unbelievable contest – details coming soon.”

Earlier this week, Mustaine revealed that the band had eight songs in play for their new studio album and would like to record at least another four tracks.

Megadeth will release their new compilation album Warheads On Foreheads on Friday and recently revealed they’d mark their 35th anniversary with a new graphic novel titled Death By Design.

Megadeth: Warheads On Foreheads
Megadeth look back on 35 years of thrash with this 35-track anthology, featuring tracks including Mechanix, Wake Up Dead, Hangar 18 and The Threat Is Real.View Deal