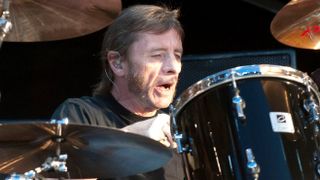 Former AC/DC drummer Phil Rudd says he was “surprised” at how well frontman Axl Rose did when fronting the band.

Rudd, who was dismissed from the group in 2015 after being charged with threatening to kill and drugs possession, and wound up serving eight months of home detention in New Zealand, was replaced by returning member Chris Slade.

Since then frontman Brian Johnson and bassist Cliff Williams have left the band, with mainman Malcolm Young having bowed out previously.

Johnson was replaced in the touring lineup by Axl Rose – and despite previously reporting that he didn’t rate Rose, Rudd now admits the Guns N’ Roses man did a good job fronting the band.

Rudd tells Music Radar: “I watched some clips the other day of Axl singing with the boys. I was surprised – it wasn’t too bad. I was quite surprised, I thought he did quite well and that’s not an easy gig.

“AC/DC is a tough gig for everyone in the band. I saw Angus jamming with Guns N’ Roses as well. Apart from watching those clips though I don’t know what’s going to happen or what’s going on with the band.”

Rudd released solo album Head Job last year and will head out on a European tour in March. The run of shows includes an appearance at Bonfest in Kirriemuir, Scotland – a festival which honours late AC/DC frontman Bon Scott. And Rudd says it’ll be a special experience.

He continues: “It’s gonna be great. We’re all huge Bon Scott fans and we’re gonna go there and show them how Bon Scott would have liked it. Well, at least I hope we will, who knows I might make a huge fuck-up! Hopefully we’ll be fine. We’re hoping to do Bon proud with that show.”

The tour kicks off at Oslo’s Hard Rock Cafe on March 31.

Eight facts about Phil Rudd, one of rock's great drummers