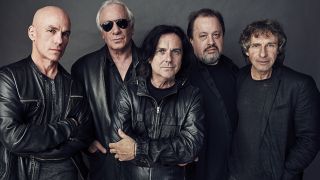 Marillion have released a video for their track Estonia from their upcoming studio album With Friends From The Orchestra.

The record will be shipped on October 9 and sees the band team up once again with string quartet In Praise Of Folly, who have previously toured with Marillion.

The nine-track album features re-workings of some of the group’s best-loved tracks, with Estonia – which originally featured on 1997’s This Strange Engine – leading off the record.

Announcing the album, Marillion said: “We have an announcement and a confession! Since this year’s conventions we have directed our energies to the early part of our creative process which will lead, at some point, to our next studio album.

“However, we also took a quiet decision that it could be a beautiful thing to re-record some of our catalogue along with our friends from the orchestra.

“So our brilliant producer and collaborator Michael Hunter wrote some new string arrangements and we took a week out to go to Real World Studios and record with our friends – the wonderful string quartet In Praise Of Folly, the brilliant flautist Emma Halnan and the gifted French Horn-ist, Sam Morris.

“The result has exceeded our expectations, is indeed a thing of beauty, and gives us the chance to release this 80-minute CD to accompany our forthcoming November and December European tour together.

“We hope you enjoy the songs and agree with us that some of them are actually better than the originals! Whether or not you agree with that bold statement we’re sure this work will move you. See you soon when you’ll hear it all live.”

Update: With Friends From The Orchestra will be also be released on CD, 2LP gatefold on heavyweight vinyl, limited and coloured 2LP and on digital and streaming platforms on November 29 through earMusic.

Marillion’s tour dates with In Praise Of Folly will get under way at the Liverpool Philharmonic on November 1 and wrap up with two shows at London’s Royal Albert Hall on November 18 and 19.

A deluxe edition of Marillion’s 1995 album Afraid Of Sunlight will also be released on November 1 on 4CD/Blu-ray and as a 5LP box set.

Marillion: With Friends From The Orchestra
1. Estonia
2. A Collection
3. Fantastic Place
4. Beyond You
5. This Strange Engine
6. The Hollow Man
7. The Sky Above The Rain
8. Seasons End
9. Ocean Cloud