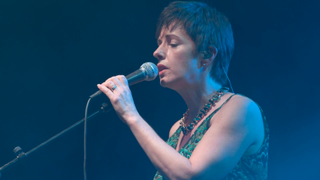 A still from the video featuring Christina Booth

Magenta have released a video of them performing Devil At The Crossroads live.

It’s lifted from their new live DVD, which they’ve officially named Chaos From The Stage. It was filmed at Leamington Spa’s Assembly Hall last November.

The Welsh outfit will embark on their biggest ever UK tour next spring for their 15th anniversary and their forthcoming as-yet-untitled album, which is due out in April 2017.

Rob Reed said of the follow-up to 2013’s Twenty Seven Club: “We haven’t played live a huge amount in the last couple of years, so it will be great to get back on the road for an extended series of dates and play pieces from the new album alongside some of our older material.”

Further release details from Chaos From The Stage will be made available in due course.