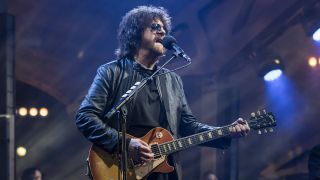 Jeff Lynne’s ELO have released a video of their performance of Turn To Stone.

It was filmed at London’s Wembley Stadium on June 24 this year and features in upcoming live package Wembley Or Bust, which will arrive on November 17 via Sony Music on 2CD, 2CD/DVD, 2CD/Blu Ray and triple vinyl.

Speaking about the summer performance, Lynne tells The Independent: “Our fans are the best, because they not only showed up, they sang along with all their hearts.

“I will never forget standing on stage, looking at that audience and hearing the sound of 60,000 of them singing my tunes – and sounding great, I might add.”

The live package is said to include “performances of many of the most beloved songs of our lifetime, from vintage ELO classics like Mr. Blue Sky, Livin’ Thing and Evil Woman to Do Ya from his days with The Move, Handle With Care which he recorded with the Traveling Wilburys, right through When I Was A Boy from his latest ELO masterpiece, Alone In The Universe.”

Wembley Or Bust is now available for pre-order. Find the cover art and tracklist below.