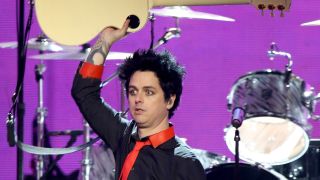 Green Day took aim at US President-elect Donald Trump and the state of politics in the country while performing live at the American Music Awards.

While playing their single Bang Bang from latest album Revolution Radio, Green Day broke into a repeated chant of “No Trump, No KKK, No fascist USA.” The chant is a variation on the chorus from punk outfit Millions Of Dead Cops (MDC) track Born To Die, released on their 1982 self-titled debut album.

Video of Green Day’s anti-Trump message can be viewed below.

The event was held on November 20 (Sunday) at the Microsoft Theater in Los Angeles, California, and saw Twenty One Pilots win both Favourite Alternative Artist and Favourite Pop/Rock Band/Duo/Group. Prince’s Purple Rain album was named Top Soundtrack. Sales of the album soared after Prince’s death earlier this year.

At the AMA’s, Prince’s sister Tyka Nelson accepted the award and paid tribute to the late star. She said: “Prince defied the odds.

“A black teen from Minneapolis with a goal to electrify the world, he had the courage to be different. With his vision and God-given talent, he is still one of the world’s most respected and loved artists.

“But what he told me was he wanted to be known as the world’s most prolific songwriter and with 984 titles to his credit and counting, he has done just that”

Meanwhile, former Motley Crue man Vince Neil and his solo band will no longer be performing at Trump’s upcoming inauguration. He says he was asked to play live at the event scheduled for January 20 next year, only to have the invite revoked when the controversial Republican candidate won.

He tells TMZ: “There are more politics were involved in bands playing than I thought there was! I just assumed that what it was, it doesn’t matter who won, it was still a big party.”