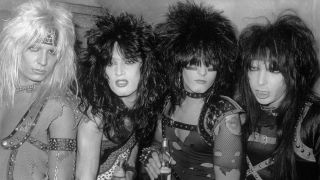 Everyone has a Motley Crue story. Here are two of mine, from either end of the band’s sticky spectrum.

Picture this: side stage at a Crue show somewhere in the Midwest, standing next to the poor, unfortunate roadie on Nikki Sixx spew patrol.

Crue were in their pomp in the USA then, with girls, drunk and drugs a constant as they snaked their way across country. Sixx, head-banging furiously, running into the wings to throw up into the bucket proffered by his wan-looking tech. Sixx, laughing as he ran back on stage, chin still smeared with his oily deluge. He’d do that three or four times a night sometimes.

Cut to backstage at the Classic Rock Awards at the Roundhouse years later, Nikki sitting alone backstage, sipping a green tea, everything absolutely Zen. A glance. Then, “Dude, I know you…”.

It’s a wonder he can remember anything at all.

It’s hard to forget the Crue, not least with The Dirt in endless paperback reprints and a bona fide Netflix hit. So here are just a few of the wrecks, some literal, that the band walked away from.

10. The apartment from Hell

Like pigs, the band enjoyed revelling in their own filth. The band's Sunset Strip apartment had a roach problem on a near Biblical scale. They couldn't afford pesticide, so they'd use lighters and hair spray to exterminate the bugs, which showed some initiative if nothing else. Another innovation came in the shape of toilet paper, or the lack of. They'd use socks, band fliers, magazines or whatever else came to hand.

To keep things on an even keel at home, the band would hide the fact they’d been playing away with groupies by visiting a restaurant called Noggles, buying egg burritos, and rubbing them on their crotches to cover the smell of sex. Noggles had a bathroom that they never once thought to visit and wash their dicks instead.

Tommy Lee and Nikki once had a bet to see who could go the longest without showering and still hook up with groupies. After a few weeks of leather pants and sweating on stage, even the most ardent of groupies couldn’t be blamed after getting to waist level with Sixx, becoming overcome with nausea, and vomiting spaghetti up all over his junk. One hopes it helped mask the smell.

Tommy Lee once slept with a plus size fan just so he could drive her Jaguar XJS. As Vince Neil recalls in The Dirt: ‘She told him that if he fucked her, she’d let him drive the Jaguar. That night, Nikki and I walked into the house to find Tommy with this quivering mass bouncing up and down on top of him. The second Tommy finished, he buttoned up his pants and looked at us.

Lee slept with a studio engineer to get some free time to record the band's first songs, after Crue ran out of money mid-session while recording a three-song demo. Rather than pony up more dough, or come back another time, Lee hooked up with the female engineer recording the band. Later, they’d record the Too Fast For Love album completely drunk. In just three days.

After a night at the Rainbow with Lita Ford, Sixx saw some bikers harassing girls on the street and intervened. Sixx told one of the bikers to chill, and when the biker told him to fuck off, Sixx removed the metal belt he was wearing and hit him in the face. In classic Crue style the bikers turned out to be undercover cops. They broke Sixx’s cheekbone before dragging him to jail. On the upside, he got the song Knock ‘Em Dead, Kid out of it.

4. The death of Razzle

In 1984, Neil was with the members of Hanoi Rocks at his home in Redondo Beach. Running low on drink, and though completely smashed, he and Rocks drummer Nicholas "Razzle" Dingley did a booze run. Neil crashed into another vehicle, killed Razzle and injured the occupants of the other. Vince, equally blessed and cursed by that Motley Crue magic, was sentenced to a mere 30 days in jail. He was released after 15 days due to good behaviour.

The escalation of self-loathing, boredom, drinking and drugs and near constant touring lead to Lee and Sixx breaking bottles over each other's heads and swallowing light bulbs for fun. They threw a bed out of their hotel window onto a Mercedes. Lee set his hotel bed on fire in Switzerland. And, in perhaps a new low, he pushed a phone receiver inside a groupie and then tried calling her mother. Oh, how the days must have flown by.

After nearly dying from a heroin overdose in 1987, the first thing Sixx did when he got home was shoot up more heroin. I remember someone at his record label at the time telling me that Sixx had come to the next day to discover his bedroom walls covered with sprays of his own blood. Then again, they got Kickstart My Heart out of it.

1. Diary of a madman

After Vince Neil and Ozzy Osbourne were alleged to have stolen a car and gone joyriding around Memphis, Ozzy, in a sundress (it gets hot in the US in the summertime) upped the ante by snorting a line of ants and then drinking not only a pool of his own piss, but that of Nikki’s too.

It’s not recorded if Sixx got a song out of that too.