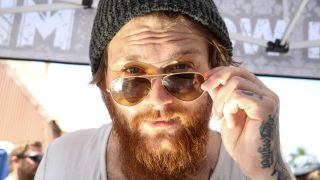 Footage has emerged of Danny Worsnop making his live return to Asking Alexandria.

The video was shot at Seattle’s Showbox SoDo – the first show on their 10 Years In The Black tour.

The reunion was confirmed at the weekend, following a breakdown in relations with Worsnop’s replacement Denis Stoff, who’d joined in 2015.

Asking Alexandria’s Seattle setlist excluded all songs from latest album The Black – their only record featuring the Ukrainian musician. Fans on social media have commented on the fact that nothing from The Black was performed and that a number of tracks not played live in years were included.

Guitarist Ben Bruce reported that Stoff had “just stopped talking” to the band – but the singer hit back later, saying: “I left AA because I can’t be in a touring band at this point in my life. There’s no drama and I don’t want to be a part of it.”

Matt Good – who’s a member of Kill It With Fire alongside Bruce – has revealed studio work is in progress.

Worsnop said of his return: ”I’m now in a place mentally where this is something I can embrace again, with the men I started this crazy journey with. It’s a beautiful nostalgia that feels like nothing ever changed.

“All I can speak to is my excitement to be working with my old and dear friends, playing music we made for a decade that we are here to celebrate.”