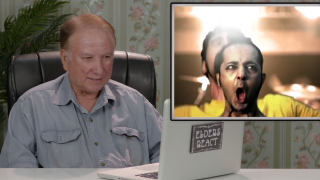 A screenshot from the video

System Of A Down have been exposed to pensioners’ judgement in the latest Elders React video.

Serj Tankian and co’s videos for Chop Suey and Sugar were shown to a panel of pensioners – who were then asked what they think about their music.

Their reactions ranged from, “They’re scary looking,” “I wouldn’t give them a penny” and “There’s no beauty in it” to “It gives me energy and it gets me moving” and “It’s like a release of frustration.”

System Of A Down’s sound left a lot to be desired among the elders panel. But frontman Tankian’s “anti-establishment” lyrical message and commitment to raising awareness of the Armenian Genocide in 1915 received the silver surfers’ seal of approval.

One woman says: “Whatever it takes to get it recognised is not a bad thing.”

One man adds: “It’s extremely important if that’s their message. I’m the son of a Holocaust survivor, so I get the importance of the Armenian Genocide – but it doesn’t have to be pounded into your head!”

The video also follows the Bring Me The Horizon and Slipknot tests.

System Of A Down recently released two rehearsal videos as they prepare for their run of live European festival dates in 2017 next year.