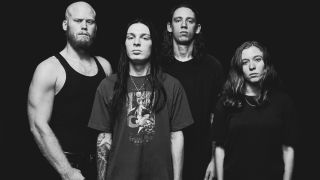 Code Orange have released a video for their track Bleeding In The Blur.

The song features on the Pittsburgh outfit’s third studio album titled Forever, which was released back in January.

Speaking about the track, vocalist Reba Myers tells The Fader: “Bleeding In The Blur was the second song we wrote on the record. I think it is just the best and most developed version we’ve made so far of a song with a strong melodic tendency.

“We’ve always attempted to make certain songs on our record have a mix of melody, dissonance and fire, but Bleeding In The Blur has our best balance of those elements thus far in my opinion.

Myers adds: “When it comes to what we are creating we don’t compromise for anyone. We write what we want to write and make the choices we want to make and feel are best suited for us as a unit. Whatever we end up doing that will always be the case.”

Code Orange will play dates across Europe this summer both at festivals and with System Of A Down. They’ll then return to the US in July for a further four shows.