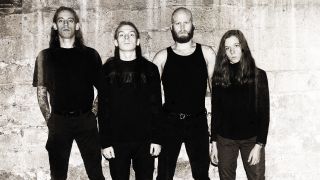 It’s release day for Code Orange’s Forever, and the alternative musical corner of social media is losing its collective excrement. Their third record is heavy, aggressive, and already a contender for album of the year. In January. Yes, it’s that good.

Speaking to Metal Hammer from the band’s home of Pittsburgh, Pennsylvania, drummer and vocalist Jami Morgan is proudly soaking up the hundreds and thousands of tweets being hurled at the band about their ferocious masterpiece.

“We wanted to make a record that felt furious and insane, and didn’t feel a little bit watered down the way a lot of records do when bands try their hand at art,” he passionately explains. “What we want to hear is not out there in this combination, so we’re creating it.”

Its roots lie in Jami’s teenage years. Growing in Pittsburgh, he and his mates thrived on a steady diet of hardcore, metal and industrial, taking in everyone from Converge to Hatebreed to Skinny Puppy. He describes his friends as “just little freaks who were all mixed up and liked all kinds of mixed-up shit,” and it wasn’t long before their love for Operation Ivy and going to punk shows became something more than a passing interest. When they formed a band at 14 years old, Code Orange (originally called Code Orange Kids) were too young to play a lot of the local bars and venues with age restrictions, so they played in houses and churches instead. And eventually this constant gigging took them out of the Steel City and into the back of a van.

“I’m 23 years old, and we’ve probably done 20 tours in America, 10 of which no one was at because we were 17 years old and we just booked it ourselves,” says Jami. “A lot of bands who are growing, they’ve never done that, they don’t know that grind, and that grind is there inside of us.”

It’s this grind that helped shape Code Orange’s obtuse, jarring, and pained music, resulting in one of the most emotionally draining records of the past decade. Forever takes cues from everyone from Nine Inch Nails to Soundgarden via Full Of Hell; this is punk, but not as you know it.

Jami has previously called Forever a revenge record – which is apt, as sonically it’s the sound of a revenge killing. It’s a direct continuation of 2014’s pioneering I Am King album.

“I Am King was about coming into yourself and accepting yourself, and trying to be better than what you are,” he explains. “Coming out of that, we had a lot of experiences with people that made us feel we couldn’t trust them, and that some of our friends weren’t our friends. We wanted to make a really pissed-off record, with an ‘us against the world’ feeling. Our music is negative, but it’s not nihilistic – there’s purpose to it. It’s not just about ‘rah rah rah rah’, it’s not that level of painful, it’s more like a serial killer – it’s calculated.”

But it’s not just the music that’s orchestrated to invoke feelings of hurt and anguish. Forever’s artwork features a chokehold in splashes of red, black and grey to create what Jami describes as “different shades of pain”. It’s an extraordinary approach from a young band, who are embracing everything they see and hear to create something that’s totally unique and immediate. The album is also their first for renowned mega-label Roadrunner, meaning they will be exposed to a bigger audience than ever before. You can almost smell the ambition on Jami’s breath.

“We made a really artful record that is not drawn out and not ‘post’, it’s very now, it’s right fucking now in this fucking moment,” he says. “That was the goal and that’s all that really matters. Bands should be worried because we are coming and we have made a record that can get out there to more people. We are going to come and play those festivals; we are coming purely for the fucking music and purely for the fucking aggression. I don’t care about any of that other shit.”

And it’s this focus, this drive, this no-fucksgiven attitude, that makes Code Orange such a force in our scene. The passion and hunger he has for breaking boundaries and erasing bad music from the scene is palpable. They aren’t here to play the PR game or suck up to bigger bands to try and blag it on a tour – they’re real, and they’re going to get what they want, even if you get in the way.

“People are picking up what we’re putting down and I think it should be scary for all these bands that have been kicking for a long time,” Jami spits, getting riled and ready. “We’re all just fucking people and that’s what we want to represent. We’re not cool, we’re not anything, we’re just fucking going for it.”

But don’t confuse this confidence for arrogance. Having quit their day jobs to do the band full-time, Code Orange practise every day and are giving every ounce of blood to make their vision come to life – and they don’t give a toss who they upset in the process, even riling up a lot of younger music fans by calling out Asking Alexandria’s rockstar mentality on Facebook late last year, in response to a video of the band bragging about wrecking hotel rooms.

“That didn’t have anything to do with their music. I saw a video, they said fucked-up shit, I said it was fucked up, that’s it! It’s easy-peasy simple. I got a million messages saying, ‘You guys are nothing’ and I don’t give a fuck. That’s not why I’m doing this, I don’t care at all. I moved on the next day.

“If we don’t like a band and they have a problem with that, they can come talk to us, it’s not a big deal. I’m not saying anything personal about anyone, I just don’t like bands,” he adds candidly. “There are all these worlds of heavy music but I just don’t think they bring much to the table and I don’t find them creative or interesting. That doesn’t mean that I dislike the people. I just don’t care.”

With a straight-up hardcore punk background and upbringing, there’s a defiant attitude in everything Code Orange do. In their almost 10-year lifespan as a band, they’ve poured their souls into creating art so bleak and harrowing you need an acid bath to wash the dirt off. It’s unadulterated and unchanged from their minds to the mixing desk. But are they the real deal? Is this level of vitriol more than just a savage gimmick?

“Everyone has a lot of aggression and rage inside of them, and we’ve casted out different ways to channel it since we were 14 years old,” insists Jami. “We stand for being yourself, not taking any bullshit, and not being told you can’t achieve things that you want to achieve.”

But Code Orange isn’t a steam train on a never-ending track to global domination. Jami is a realist and knows the confines and constraints of being in a band. When the phrase ‘artistic differences’ is a euphemism for everything from ‘takes too many drugs’ to ‘slept with my wife’, careers can end in the blink of an eye.

“As soon as we start compromising what we do, or when the ideas are gone, that’s it,” he states bluntly. “And that’s the way it has to be when you’re so driven and dedicated to your art. Embrace and fight for everything, because you won’t know when it’s over.”

FOREVER IS OUT NOW VIA ROADRUNNER