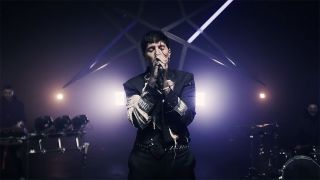 Bring Me The Horizon have released a video for their new single Ludens.

The track emerged earlier this month when it was revealed that it would appear on the soundtrack to Hideo Kojima’s new blockbuster PlayStation 4 video game Death Stranding.

Now the video is out and it flicks between film of the band playing the song and footage from the game.

Death Stranding sees the player take control of Sam Bridges as he attempts to deliver supply packages across a vast post-apocalyptic US, while under threat from supernatural horrors called BTs – beached things – and gangs of bandits.

Bring Me The Horizon frontman Oli Sykes said: “Death Stranding is a game I’ve been waiting for long before collaborating with them was on the table.

Meanwhile, it was announced earlier this week that Sykes and his clothing company Drop Dead had collaborated with Cradle Of Filth on a new range of clothing.