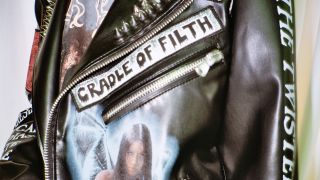 An example of the DropDead/Cradle Of Filth collaboration (Image credit: Drop Dead)

Bring Me The Horizon frontman Oli Sykes set up Drop Dead Clothing back in 2005 – and today it’s been revealed that the company have collaborated with Cradle Of Filth for a new range of clothing.

Sykes and Cradle’s Dani Filth teamed up last year for the video for Bring Me The Horizon’s Wonderful Life, with the new range of 20 pieces including cut and sewn t-shirts, knitwear, accessories and more – all made using cruelty free materials.

Sykes says: “Ever since I was a kid, Cradle Of Filth have been an enigma to me.

“Ever since I saw their infamous ‘Jesus is a youknowwhat' shirt – widely regarded as the most controversial t-shirt of all time – I fell in love with the band.

“I love their approach to the uber serious clique they're in and their tongue in cheek designs – and the fact that they don't give a monkeys about ruffling a few feathers.”

The range will launch in the UK at Drop Dead’s flagship store in Marshall Street, London, on November 16, while the company have also revealed that a pop-up shop will appear in the centre of Harajuku, Tokyo, from November 15-17 where the range will also be on sale.