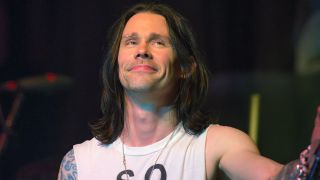 Alter Bridge frontman Myles Kennedy says the Guns N’ Roses reunion is “a well-needed shot in the arm for rock’n’roll.”

The singer also works with Slash in his band The Conspirators and says he doesn’t see that collaboration happening again any time soon as the GNR reunion is going so well.

Slash, Axl Rose and Duff McKagan confirmed their reunion earlier this year and are currently on the road on their Not In This Lifetime tour.

Kennedy says: “There was always a feeling inside that it was eventually gonna happen, it’s such an incredible band and it was inevitable. When he told me, the first thing I said was, ‘You guys are gonna make a lot of people extremely happy, myself included.’

“I had the opportunity to see the first night they did in Las Vegas. It was just so great to see those guys together on stage again. As a rock fan, it’s good for rock. It’s a well-needed shot in the arm for rock’n’roll.

“It’s going so well, so I don’t see it slowing down anytime soon.”

Kennedy is gearing up for the release of Alter Bridge’s fifth album The Last Hero on October 7 – their first release with Napalm Records, who are better known for working with heavier bands. The singer says the relationship doesn’t signal a change in the band’s sound.

He says: “They seemed extremely passionate about the band so it felt like that was obvious choice for us, internationally speaking. But no death metal!

“I wouldn’t say it’s heavier. We’ve found our place musically. We try to be as dynamic as possible and integrate a lot of different things emotionally.

“The key is to convey a certain emotion and honesty and something universal that people can relate to. That’s the important psychology of Alter Bridge.”

Kennedy previously revealed he was working on his debut solo album, which he now says is at the mixing stage. But he won’t release it until there is an appropriate gap in his career with Alter Bridge and Slash’s Conspirators.

“I think I will always try and stretch myself,” he says. “I do have a solo record being mixed as we speak that is more acoustic based, more singer-songwriter based.

“It has blues elements, ethereal elements. It’s something creatively and artistically I just needed to do and get off my chest.

“As far as the goal to release it, I’m gonna wait and see how long this Alter Bridge tour runs and see what happens with The Conspirators and Slash.

“I don’t just wanna drop it and throw it out there because the goal making the record was always to go out there and just play with a guitar, just an acoustic guitar – me against the world.”

Alter Bridge have tour dates booked throughout 2016, with an appearance on the Miami Shiprocked festival also confirmed for January 16 next year.

The full interview with Myles Kennedy, recorded at Heavy Montreal 2016, will feature on an upcoming episode of One On One With Mitch Lafon. A shorter version of the chat can be heard below.