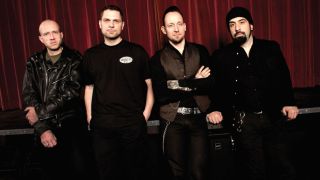 The pair says: “In connection with the planning and preparation of Volbeat’s extensive future plans and wishes for 2016 and onwards, Volbeat and Anders Kjolholm part ways. All matters related hereto have been mutually and respectfully agreed upon. All announced shows will happen as planned.

“Anders has been a loyal friend and bandmate since 2001. We’ve toured most parts of the world and shared experiences that only few bands get to do. We’re very thankful for this and wish Anders all the bext in the future.”

Kjolholm adds: “It has been a great experience to be a part of the Volbeat family for so long and I wish Michael, Jon and Rob, everyone involved with the band and, of course all the fans, all the best on the continued journey.”

Volbeat have been working on material for a follow-up to 2013’s Outlaw Gentlemen & Shady Ladies.

The band will return to live action next summer when they perform at festivals across Europe.