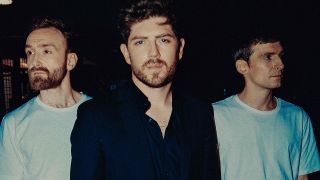 Twin Atlantic have announced a 13-date UK tour for next year.

The band will kick things off with a performance at the Motherwell Concert Hall on March 3 and wrap up with a set at London’s Electric Ballroom on March 20. The dates have been lined up in support of their new album Power, which will launch on January 24 through Virgin EMI.

To mark the live news, Twin Atlantic have released a video for their new single Novocaine which can be watched below.

Speaking about the concepts and themes behind the Alex Nicholson-directed promo, frontman Sam McTrusty says: “The collage approach to Alex’s idea was really appealing to us. It’s the exact same way we have been approaching writing lyrics on this album.

“A sound or a colour evoke a feeling or a memory and you chase that down a rabbit hole and see what it unravels from your subconscious. To have a director listen to the song and get that was lucky.

“Working to the limitations of just red, green and blue lighting was another way this ties into the record. We’ve found that by limiting ourselves we actually use more of our imagination and creativity.”

Nicholson adds: “I really wanted to create something different for this incredibly powerful song. I wanted the viewer to feel, to live the lyrics and to ignore everything else around them – just digest what they were watching.

“It’s a sensory experience. Put on your headphones, ignore everything else around you and immerse yourself in the epic sound and visuals.”

Twin Atlantic are currently on tour across the UK with Catfish And The Bottlemen.

Twin Atlantic: Power
Twin Atlantic return with their new studio album Power. The follow-up to 2016's GLA will be released in January and features the single Novocaine. They'll also head out on the road throughout March.View Deal