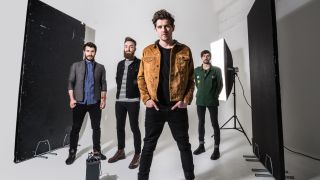 I'm still young, aren’t I?” Sam McTrusty asks aloud, sitting on the terrace of trendy, members-only venue The Hospital Club in London, where they’ll play an exclusive set tonight. “Twenty-six. Is that young?”

Such a question is unlikely to buy him many friends over 30. But the truth is that for someone who began fronting Twin Atlantic as a teenager, 26 does feel old. Since then, the Glasgow foursome have honed a bright-eyed, stadium-pleasing rock recipe – delivered in many actual stadiums. Catchy, pop-souled melodies echo their fondness for what McTrusty calls “American songbook greats”, fortified by a collar-grabbing rock quality reminiscent of Foo Fighters and Biffy Clyro.

On face value, Twin Atlantic have seemed a ‘yoof’-friendly act for much of their career. Making the cover of weekly music magazines, scaling the UK Top 10, amassing a tonne of fans bearing tattoos of their lyrics, having a frontman with teen poster-friendly good looks… But as third LP The Great Divide attests, there’s substance to match the style.

“It’s all been quite surreal,” McTrusty says, not for the first time today. The lead singer/guitarist seems to realise this, quickly adding: “We do eventually digest it – we’re not total space cadets!”

The last time I saw Twin Atlantic, they were wiry, fiery bundles of energy onstage at Manchester Academy in 2010, pleasing students and 40-somethings alike. Today, McTrusty and bassist Ross McNae (hearty of beard, swaggering of bass grooves) seem somehow calmer – still enthusiastic, but just… well, more grown-up. They have a chatty boy-next-door demeanour, but there’s something in the way they hold themselves that says ‘definitely a wee bit famous now’. Not arrogance, just a quiet confidence that suggests they’ve experienced a screaming fan or two, but are still excited by the novelty. Not to mention joke marriage offers, in McTrusty’s case.

“It can be pretty awkward, but sometimes it’s good,” he grins under his shades. “I did get a 36-pack of Fruit Gums with one proposal.”

“You should have just said yes!” McNae jibes.

“I did say yes!” McTrusty retorts. “It sounds nuts, because it’s not as if we’re a really famous band.”

They’re certainly big in Glasgow though, and, increasingly, further afield.

Hear Twin Atlantic (completed by guitarist Barry McKenna and drummer Craig Kneale), with their heavily accented vocals that make it clear they’re very Scottish, and parallels with fellow ‘big rock’ Scots Biffy Clyro do emerge – albeit in a poppier sense. But in a wider respect, the musical culture surrounding them – spanning Belle & Sebastian, Boards Of Canada and The Jesus & Mary Chain – provided a rich drip-feed across their formative muso years.

Having ingested their parents’ Bruce Springsteen and classic rock records, the young McTrusty and McNae met in high school. For McTrusty especially, who grew up in an inner‑city tenement flat with his mother and sisters, the seeds of wanderlust were sown early. “I’d spend two days with mum, then two days with another family member,” he recalls. “I never really had a base.”

He continued to move around more than his bandmates, even living (on and off) in Canada for a year, until recently settling with his girlfriend in Glasgow.

He and McNae bonded over the birth of the internet and second-wave US punk rock. This sense of new beginnings and punk-tinged joie de vivre has never left them. “We were at just the right age for the beginnings of Napster and that kind of thing – having everything at your fingertips,” says McNae.

Children of a techified era, they nonetheless veered from screens to street art, via roller blades. Skating in a little gang through the alleys and public spaces of Glasgow, the pair absorbed and added to the city’s dramatic graffiti landscape before progressing to art school (McTrusty to paint, McNae to study photography), alongside working in their day jobs.

“That turned out to become a crucial part of how we write songs,” McTrusty says. “All these avenues we experienced music through were pulled together.”

Absorbing influences, McKenna was playing cello in orchestras, while McNae filled his ears with dance music on delivery driver shifts. McTrusty, meanwhile, was discovering the ‘cool school’ elite of Scottish rock, working as a barman in various Glasgow joints – including the hipster-tastic Nice N’ Sleazy. “They played Jesus And Mary Chain, Belle & Sebastian… all that heady shoegaze stuff.”

Cutting limes in another bar job, McTrusty stumbled upon something of a Glaswegian rock oracle – the venue’s head chef. “He’d play some music and be like, ‘That’s Mogwai. You didn’t know that? They’re from fucking Glasgow man!’” he remembers. “And he shamed me. He fucking schooled us in alternative rock.”

Said chef became the drummer in Twin Atlantic’s initial, brief incarnation as a trio in 2006. By 2007, however, McTrusty and McNae had joined with McKenna and Kneale – all four of them had gigged in small-time bands on Glasgow’s alt.rock scene – to form Twin Atlantic proper. Full-time jobs were quit, university/college courses abandoned and band life pursued in earnest.

Having filled early gigs with their mates, their reputation grew and the band made themselves available for every live opportunity going. Shows became more impressive, including support slots with The Gaslight Anthem and Blink 182, and influences were streamlined into their style.

“There’s making your own luck, then there’s doing what we did – going to every extreme possible,” McTrusty reminisces. “For two or three years we supported pretty much every American band. It was crazy.”

Popularity snowballed, 2011 album Free hit No.5 in the UK rock charts, and in 2012, extreme skydiver Felix Baumgartner fell through space to a remix of their Free single. Both Baumgartner and Twin Atlantic, in their own ways, shot into the wider public vision.

Wind the clocks forward to 2014. The band arrived in Topanga, Los Angeles, to complete work on The Great Divide, having also recorded with Gil Norton (Pixies, Foo Fighters) at Rockfield in Wales. Sessions there with producer Jacknife Lee (Weezer, R.E.M.) turned out to be the shot in the arm they needed to raise their game. “He [Lee] was exceptionally crazy to work with. It was like we got put in a fucking salad dryer for a month,” McTrusty says. “But we needed it. We’d all been doing our homework for this record. Craig had been rehearsing drums for three hours a day, then he’d run for four miles a day. He’d been doing that for about three years. And I’d only been listening to old music, downloading material from the twenties, and a lot of sixties rock’n’roll.”

Happily, it worked. The Great Divide is a tight, lyrical piece of modern rock, pushing grown-up pop prettiness (Oceans) and searing, melodic pop rock (I Am An Animal). It’s even gained plaudits from the likes of Radio One.

While there are a few more people in the bureaucratic mix, some things haven’t changed. McKenna’s old schoolfriend Amy is still their manager. They’ve got the same sound guy and booking agent they started with. Yet there’s something in their casual charm, the album’s assurance, that gives the sense of a band reaching big-hitter rock echelons.

“It’s strange, but it feels like the last seven or eight years have been building up to this point,” McNae observes. “It feels like we’re going somewhere.”

With mainstream recognition, scope for multi‑generational appeal and – seemingly – no diva spats on the horizon, the Twin Atlantic of 2014 are a commanding proposition, bringing a vivacious spark to the crowd-pulling rock groundwork laid by Dave Grohl and company.

“I think we’ve learnt over the last few years that the ultimate goal has to be to just… be happy. Whether that means getting bigger, stopping, or changing direction musically,” McTrusty says. Suddenly, he sounds much older: “You need to be selfish to be in a band anyway.”

“For the time being,” McNae agrees, “this is definitely ‘happy’.”