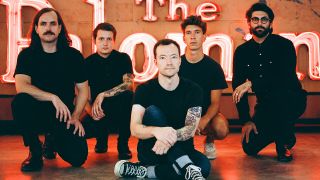 The follow-up to the Los Angeles outfit’s 2016 record Stage Four will arrive on October 9 and to mark the news, Touché Amoré have shared the single, Limelight which features Manchester Orchestra and Bad Books’ Andy Hull.

Touché Amoré say: “When you’re connected to someone long enough, and you’ve both suffered losses and been there for one another, there’s an understanding and a beauty to the quiet moments.

“There’s a great line in Pulp Fiction when Uma Thurman boasts knowing when you’ve found someone really special, when you can just ‘shut the fuck up for a minute, and comfortably share silence.’

“I imagined that you’d be shamed for casually omitting that a day or two may go by without realising you haven’t kissed your partner, but at no point did things feel bad. You’re just in it and it feels like home.”

Lament will also feature the single Deflector which was released in 2019.