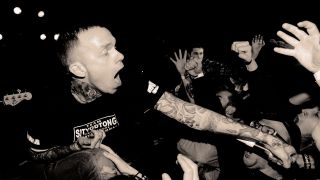 It’s appropriate that Touché Amoré frontman Jeremy Bolm chose to make a list of Converge songs, because that band’s guitarist, Kurt Ballou, just mixed the debut record by Bolm’s ‘supergroup’ side project, Hesitation Wounds. Converge also took Touché Amoré on tour in Europe with them at the end of 2012, in support of their last album, All We Love We Leave Behind. Yet Bolm’s love and appreciation for the veteran Massachusetts metalcore band goes much deeper than those shared moments – they’re a band who have meant a lot to him for a very long time.

“Converge have always been my number one, favourite aggressive band since I first heard them however many years ago it was now,” he says. “And what’s more is that they continue to reinvent themselves. That’s something that’s always inspiring.”

“This song sticks out to me as a nostalgic memory, because Converge took Touché on a European tour a few years ago in support of this record. The outro has Kurt Ballou doing the back ups and singing the words “burn at both ends” and I could never make out what he was saying live. It just sounded like “Dah dah dah dah!” and then figuring it out and realizing what the lyrics were and watching him do it every night was really exciting, and it’s always in my brain. Whenever I listen to this song it just takes me back to that.”

“What I love about this record is that the first five songs are just relentless – they’re all like a minute long and they all blend into one another, and I love that, and by the time it gets to Vengeance, which is track four, it has this huge, long double bass outro thing – and I want to say the first time Converge truly harnessed the double bass is on this record. So it’s like hearing something for the first time, and it’s like the moment where you realise they’ve accepted that they’re going the metal route. Which was a big ‘Holy shit!’ moment for me the first time I heard it.”

“This is the second song from this album, and I chose this because track one is The Saddest Day, which is, to a lot of people, the big song. To follow up a seven minute song that’s so big and epic is really difficult, but I think they knocked it out of the park with Forsaken, so I really appreciate this. It just really rips and it’s awesome.”

“This is from the split release with Agoraphobic Nosebleed. It was a live staple for a long time and they’d always play it between 2000 and 2008, though I think they’ve retired it at this point. But it was always a set highlight because as soon as the breakdown comes in this song, it’s just hell. It’s awesome.”

5. MY UNSAID EVERYTHING (When Forever Comes Crashing, 1998)

“I would say that Converge are masters of the track one, where every track one on every one of their records is a beast, and this one is certainly no different. I remember getting this record for the first time, putting it on and again just laughing because of how immediate it is, and I think that always stood out for me.”

“There’s not a lot I can say about this song except that it’s an absolute ripper. Just from start to finish it’s full-force in a way that…I think Axe To Fall is where they really harness the metal sound. The record before, No Heroes, was definitely the hardest at that point, but this one really went full-board!”

“Jane Doe, I think, is still my favourite record as a whole a piece, but I think I only chose one song from the record for this list, which is weird that it worked out that way. But what makes Distance And Meaning so fucking good is when you listen to the song – you know how there can be just one little, minor thing that happens in a song which makes the entire thing? – it goes and it goes and it goes and then it randomly has a stop, and the feedback that fills that break is so abrasive, and then it just comes in super hard right after. But just that little, quickstop feedback part just fucking makes me want to crash my car. It’s so hard!”

“This is the big jam on this album. It’s the first real song on the record, the first real track after the intro and it’s melodic in a way that I feel influences so many bands – and definitely Touché – and the end has a really great build up. It’s a great song on a great record. You Fail Me in general is just incredible.”

“This is definitely not a sound that Converge harness much these days – it’s actually a kind of a fast-paced, straight-forward hardcore song. There’s not a lot of metal influence to it at all. It just sounds very modern hardcore. The phrase Buried But Breathing always stood out to me, to the extent that I have a Buried But Breathing tattoo. I just love that phrase and the song rules. It’s really short, it’s got a big singalong part at the end and it always stood out to me and it’s always been my favourite song. And I know it’s a song that I’ll never, ever, ever get to see live.”

Listen to the songs on our Spotify playlist here.

More on Converge in our archive…

Why I Love... Converge

This Is Hardcore: Converge – Jane Doe