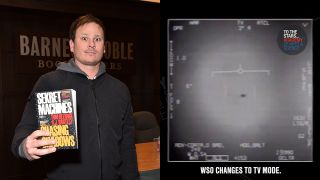 Having spent a significant proportion of the last five years dedicated to the study of UFOs and the possibility of life on other planets, former Blink-182 vocalist Tom DeLonge enjoyed something of a breakthrough last year when the US Navy officially admitted they couldn't identify the flying objects captured in a series of videos he'd made public via his UFO research organisation To The Stars Academy.

Now, the Pentagon – yes, the actual United States Department of Defence – has officially released the videos which they claim show "unidentified aerial phenomena".

Although the US Navy acknowledged the videos last year, spokesperson Sue Gough has released a statement via the Department Of Defense website stating the Pentagon is officially releasing them now "in order to clear up any misconceptions by the public on whether or not the footage that has been circulating was real, or whether or not there is more to the videos."

"After a thorough review, the department has determined that the authorised release of these unclassified videos does not reveal any sensitive capabilities or systems," the statement reads. "[It] does not impinge on any subsequent investigations of military air space incursions by unidentified aerial phenomena."

The videos attracted international headlines and plentiful YouTube hits when they surfaced over 2017 and 2018. The first clip showed Navy pilots encountering an unknown speedy craft in San Diego, originally captured in 2004.

Two more videos, both shot on the same date in 2015 – and therefore leading to speculation that they're the same object – showed an aircraft rotating unusually and flying quickly over a bed of water respectively.

CNN, who spoke to pilot David Fravor at the time, report him as telling them: "As I got close to it ... it rapidly accelerated to the south, and disappeared in less than two seconds. This was extremely abrupt, like a ping pong ball, bouncing off a wall. It would hit and go the other way."

Donald Trump gave an interview to ABC News about the videos in 2019, saying: "I did have one very brief meeting on it. But people are saying they’re seeing UFOs. Do I believe it? Not particularly."