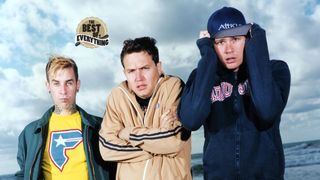 If anyone needs proof of how much of a Blink-182 fan Mike Duce really is, then just ask him about his tattoo.

“My buddy Elmo used to tattoo me for free whenever I was in between tours,” says Mike. “I was thinking about getting a Blink-182 tattoo for ages. Four years ago, I just went for it and got the band’s name tattooed above my knee. I see it every time I go for a number two, which is something I’m sure they would appreciate, knowing their love of toilet humour.

“Blink-182 is the reason I started playing guitar,” he adds. “I used to mime at first, but then I spent a whole summer picking apart songs from Enema of the State. I only learned the easier riffs at first and by the time the holidays were over, I could play the whole record.”

Here, then, are the best 11 Blink songs, according to the Lower Than Atlantis frontman.

WHAT’S MY AGE AGAIN? (Enema Of The State, 1999)
Mike: “This is the first Blink-182 song I ever heard. I can’t remember which TV station was playing it but I vividly remember that music video. It features the whole band running through the streets completely naked and causing plenty of trouble. I was just a kid at the time, so this was naturally the funniest thing I’d ever seen.”

THE PARTY SONG (Enema Of The State, 1999)
“At the start of this track, you can hear Mark Hoppus whispering, ‘Here we go, motherfuckers’ really low in the mix. I have fond memories of turning it up loud just so I could hear the words. It’s so quiet you can’t really hear it unless you blare it out full volume.”

MAN OVERBOARD (The Mark, Tom, and Travis Show (The Enema Strikes Back!), 2000)
“This was a studio single that came with their live album, The Mark, Tom and Travis Show. In true Blink fashion, the accompanying video was packed full of jokes. This time they replaced the band members with smaller lookalikes and parodied their early music videos.”

CAROUSEL (The Mark, Tom, and Travis Show (The Enema Strikes Back!), 2000)
“I would have to pick the live recording of Carousel from the same album over the studio recording on Buddha (1994). This version got me into their earlier albums. At the time, I thought this had some of the most complicated riffs ever but looking back I realise they were actually pretty easy.”

DUMPWEED (Enema Of The State, 1999)
“This is the first track on both the Enema Of The State and The Mark, Tom and Travis Show albums, so I would’ve heard this more than most of their songs. You know how it is, sometimes you put an album on and you only ever get through the first few tracks. When I used to play along these albums, I’d press play and then rush over to my guitar and try to come in at the same time as the song starts.”

ADAM’S SONG (Enema Of The State, 1999)
“They were a funny, pop punk band but Adam’s Song showed they had a different side. This is pretty much the first melancholy song they ever released – and that’s what I really liked about it.”

DAMMIT (Dude Ranch, 1997)
“I remember seeing the video and thought it looked really old, so I assumed Blink had been going for ages. The opening riff is something every Blink fan learns to play on guitar and ends up being the soundcheck riff for your very first band. It also has the word ‘fuck’ in the lyrics which is a highlight when you’re a 13-year-old boy.”

VIOLENCE (Blink-182, 2003)
“This is my favourite track on the self-titled record. The guitar part at the start blew my mind and ended up inspiring the intro to our song Far Q. I love everything about it.”

GO (Blink-182, 2003)
“I was returning home from Thorpe Park with my friend from college and he knew I was a massive Blink fan. He just so happened to mention they had uploaded a new track to their website – I had absolutely no idea. I spent the whole journey wishing his mum would put her foot down so I could get home and listen to it.”

A NEW HOPE (Dude Ranch, 1997)
“This song is all about Star Wars. I’d been a massive fan since I was about 10, so it was cool to know that my favourite band loved the film too. The song is mainly about Princess Leia – she was a massive babe and every kid’s fantasy growing up.”

WASTING TIME (Cheshire Cat, 1994)
“One of the main reasons I got into Blink was because of their guitar riffs. As a kid, they were always melodic and sounded complicated, but they actually easy enough to work out how to play. I like how Tom DeLonge would always play guitar with down strokes and that’s how I play a lot of my own songs now – plenty of palm muting and down strokes. Wasting Time has some great examples of this style of playing.”

Want even more Blink? Then read the story behind their debut album Cheshire Cat.

Blink-182: The Story Behind 'Cheshire Cat'