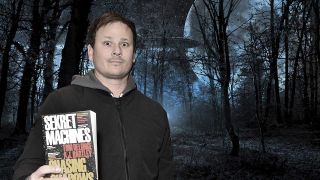 As those familiar with Tom DeLonge's oeuvre in recent years will know, the former Blink-182 vocalist has dedicated a significant amount of time over the last half-decade to the study of UFOs and the possibility of life on other planets.

Well, now it turns out all that hard work might actually have led to something. Following speculation after a series of videos were made public by To The Stars Academy – the UFO research organisation helmed by DeLonge – the US Navy have, for the first time, officially admitted they can't identify the flying objects in the videos.

Speaking to Motherboard, Navy spokesperson Joseph Gradisher confirmed that “the Navy considers the phenomena contained/depicted in those three videos as unidentified.” They also confirmed that the objects were violating American airspace.

This is significant because, unlike with other videos or documents where authorities have managed to identify the objects as weather balloons or similar, the Navy had no such explanation in any of these three cases. The only logical explanation according to world's UFO enthusiasts? Aliens, obviously.

The story was originally picked up by The Black Vault author John Greenwald, who told Motherboard: "I very much expected that when the U.S. military addressed the videos, they would coincide with language we see on official documents that have now been released, and they would label them as 'drones' or 'balloons'.

"However, they did not. They went on the record stating the 'phenomena' depicted in those videos, is 'unidentified.' That really made me surprised, intrigued, excited and motivated to push harder for the truth."

The videos attracted international headlines and plentiful YouTube hits when they surfaced over 2017 and 2018. Three in total, the first showed Navy pilots encountering an unknown speedy craft in San Diego, originally captured in 2004.

Two more videos, both shot on the same date in 2015 – and therefore leading to speculation that they're the same object – showed an aircraft rotating unusually and flying quickly over a bed of water respectively.

"That the Navy is using the term ‘Unidentified Aerial Phenomena’ shows that they have broadened what is expected to be reported by U.S. fighter pilots to investigate anything unknown in their airspace that in the past has been connected with a stigma," Swedish writer and UFO expert Roger Glassel told Motherboard.

So, there you have it. Aliens are real and the genius Tom DeLonge has brought us all into an actual, real-life episode of The X-Files. The truth is out there, indeed.