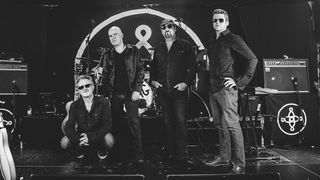 The Mission have opened a pre-order PledgeMusic campaign for a double live album titled Bending The Arc.

Vocalist and guitarist Wayne Hussey reports he’s not a fan of the traditional live album format but realises there’s a desire to document what the band are up to at this point in time.

As a result, rather than capture a live show on their upcoming tour, the band have instead decided to record a live rehearsal session with an audience in attendance on November 7 in London – and they’re asking fans to submit the tracks they’d like to hear on the album.

Hussey explains: “The idea, mine so blame me, is that a rehearsal scenario is a controllable environment as opposed to the mayhem and unpredictability of a ‘live’ show.

“As musicians we will have more control over the quality of the performance and recording. Also, we won’t be beholden to the set list we will probably be playing on this upcoming run of shows.

“There doesn’t have to be yet another ‘live’ version of Wasteland or Deliverance included on this release, the emphasis being on more recent releases and live versions of rarely recorded songs previously such as Like A Child Again and Swoon, to name but two.

“Also, with this in mind, we’d be interested in hearing what you may like to hear included on this release, bearing in mind that we need to know how to play it.”

Fans are asked to submit their suggestions on The Mission’s Facebook page.

Bending The Arc will be available on deluxe 2CD and 3LP pressed on coloured, heavyweight vinyl. T-shirts and art prints are also available for those who pre-order via the band’s PledgeMusic campaign.

Following the rehearsal session, The Mission will embark on a handful of European dates in support of their latest album Another Fall From Grace before supporting Alice Cooper in the UK.

Man On A Mission: Wayne Hussey on the band’s past, present and future