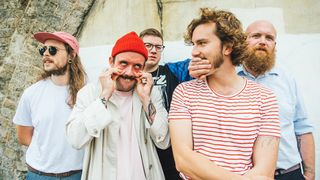 Idles frontman Joe Talbot has paid tribute to his late mother by having her ashes pressed on to vinyl.

The run of 100 copies of the band’s latest album Brutalism will be available later this month, with the singer explaining why he chose to honour his mother in such an unusual way.

He says: “Our music has saved us in many ways. My old dear didn’t have the luxury of finding something that could save her.

“I’ve had her ashes pressed into 100 vinyl to symbolise just how important she was to this album, to this band and of course to me and my drive to exist in the most loving and honest me.

“We strive to make music that invigorates people to express themselves freely without prejudice or mockery. Now you can see that we’ve put everything into our art so that maybe you can too. Don’t go gentle. All is love.”

The limited edition vinyl pressing of the album, which also features Talbot’s mother on the cover, will be available from October 30.

Uproxx have also released a short video explaining the process behind the vinyl pressings. Watch it below.

Idles have lined up two UK shows for next year. They’ll play Manchester’s Gorilla on April 18 and London’s Heaven on April 19.

Tickets go on sale from October 27.