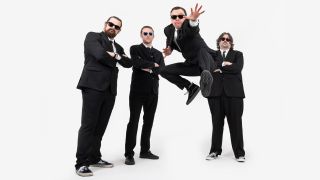 UK prog rockers The Fierce And The Dead have premiered a brand new live video for Part 7/8 with Prog. You can watch the whole clip below.

Part 7/8 is taken from the band's forthcoming live album, Live USA 17, which will be released through Bad Elephant Music on October 4. Live USA 17 was recorded at the band's appearance at RoSfest that year, and features some of the best-loved tracks from If It Carries On Like This We Are Moving To Morecambe and Spooky Action, and previewed 2018’s breakthrough album, The Euphoric.

“I still can’t believe we played in America, it was a hell of a culture shock for people from Rushden though," guitarist Matt Stevens tells Prog. "It’s our first full album and we love playing live, I’m really pleased we got a lot of The Euphoric era stuff on there 'cause we rehearsed it up especially for RoSfest. It was very surreal the whole thing. Also I was seven stone heavier then so the video is a bit bizarre to watch!  I’m really pleased its got tunes from all our albums on it.“

"George and the RoSfest organisers are the real deal, prepared to go above and beyond to bring music they’ve discovered to their audience," adds bassist Kevin Feazey. "It was great to be asked and I’m glad that we’re able to put this recording out. We always have the most fun playing live and this hopefully shows that."

The Fierce And The Dead will support Dub Trio at the Camden Underworld on November 10.