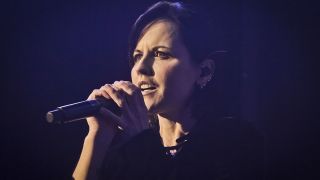 Tributes have been paid to The Cranberries vocalist Dolores O’Riordan who has died at the age of 46.

The singer died yesterday morning in London, with her bandmates Noel Hogan, Mike Hogan and Fergal Lawler leading the tributes, calling her an “extraordinary talent.”

They say in a statement: “We are devastated on the passing of our friend Dolores. She was an extraordinary talent and we feel very privileged to have been part of her life from 1989 when we started The Cranberries. The world has lost a true artist today.”

Paramore vocalist Hayley Williams said on Twitter that her favourite Cranberries track was I Will Always, adding: “I have never not cried while listening, so here we go.”

Los Angeles outfit Bad Wolves issued a statement saying they were due to record a cover of The Cranberries classic track Zombie, with O’Riordan due to record her vocal parts in London yesterday afternoon.

Frontman Tommy Vext says in a statement: “Zombie is an incredibly personal song… and we always felt the rawness and honesty she projected on stage and in her recordings was something to which all bands should aspire to.

“When we heard she wanted to sing on our version, it was the greatest compliment a band could receive.”

Bryan Adams says: “So sorry to hear that singer Dolores O’Riordan from the Cranberries passed. RIP.”

Kings Of Leon bassist Jared Followill tweeted: “RIP Dolores O’Riordan. Dreams is in my Top 10 all time. The Cranberries are so rad. Bummer of a day.”

Other artists to pay tribute to O’Riordan include Dave Davies of the Kinks, Irish musician Hozier, Duran Duran and Kodaline. Find a full list below.

No cause of death has been revealed, but police are not treating the death as suspicious, according to The Guardian.