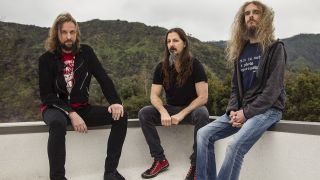 The Aristocrats have released a teaser trailer for their new DVD.

The disc will be included in the deluxe edition of the band’s upcoming studio album You Know What…?, which will launch on June 28 through Boing Music.

The clip shows Guthrie Govan, Bryan Beller and Marco Minnemann at Brotheryn Studios in California recording some of the new material – which is their first since 2015 album Tres Caballeros.

Speaking about the track Terrible Lizard, part of which can be heard in the video, Govan says: “I think when you’re a kid, there are certain obvious things that everyone is drawn to at some point – like space, that’s really cool, and dinosaurs. They’re awesome because they’re huge.

“I’ve always been fond of dinosaurs, but never met one close up – so they deserve to have a song written about them!”

The studio footage was filmed by Jon Luini and Arthur Rosato of Chime Interactive with the full DVD including further behind-the-scenes footage and interviews with the trio.

The Aristocrats will hold their own music camp in upstate New York between June 18-21 and then embark on an extensive North American tour.

The Aristocrats: You Know What…?
1. D Grade F*ck Movie Jam
2. Spanish Eddie
3. When We All Come Together
4. All Said And Done
5. Terrible Lizard
6. Spiritus Cactus
7. The Ballad Of Bonnie And Clyde
8. Burial At Sea
9. Last Orders