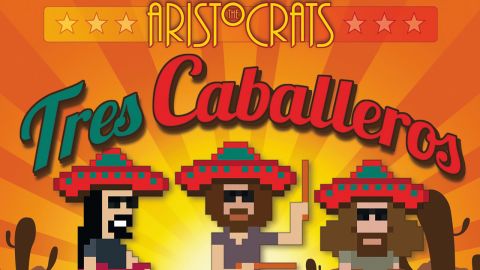 Preposterously talented, the trio of guitarist Guthrie Govan, drummer Marco Minnemann and bassist Bryan Beller have been recording and touring for the last four years after accidentally meeting at an improv showcase gig in Anaheim. Recognising their onstage chemistry, they continued to develop as a unit before recording two albums that quickly became revered in the jazz-rock fusion world.

The mere mention of the words jazz and fusion could potentially alarm those who find the genre a touch pretentious and chin-strokey, but The Arisotcrats manage to incorporate an element of light-hearted joy that repels any notions of musical snobbery.

Depicting the trio as low-resolution, early-90s games console characters, this album cover bolsters that sense of playfulness, and their knack for mixing serious musicianship with unexpected levity is what makes them endearing. This isn’t simple to achieve, but the instrumental Tres Caballeros continues that inclination and is potentially their most consistent recording to date. Indeed, perhaps realising the effervescent panache of the album, Minnemann and Govan bailed from their roles in Steven Wilson’s band during the North American tour to promote and tour their own concern.

Opener Stupid 7 begins with a fleeting, jazzy riff before quickly developing a more traditional rock element, with forceful guitars propelling the track. There are frequent breaks from the central melody, giving each member the space to scintillate with their own solos. However, these never become obtrusive or annoying, merely supplementing the music rather than becoming an over-technical, hundred-notes-a-second distraction.

Jack’s Back takes a more noodly approach, with staccato guitar, subtle drumming and central bass creating music that could neatly fit onto a Spaghetti Western soundtrack. It’s not all laid-back artistry though, and Texas Crazypants (complete with Dukes Of Hazzard-style sound effects), The Kentucky Meat Shower and ZZ Top possess a Southern rock charm that’s been added to their sound. Smuggler’s Corridor is an inventive incursion into Mexican guitar and the chilled Pressure Relief will appeal to those who prefer more traditional fusion.

It’s this mix of styles that ensures the album never becomes tedious, with countless musical twists retaining listener attention throughout. Tres Caballeros also sounds like it’s been recorded live, which is some feat given the musical intricacies and nuances. This album won’t be of universal appeal but it’s a bewildering and formidable collection that the more open-minded will undoubtedly adore.