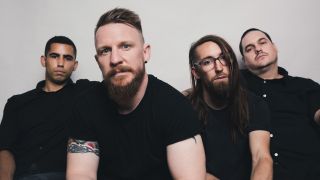 Anglo-Kiwi prog metallers Temples On Mars have been added to the bill for Voyager's Prog-sponsored show at London's Borderline show on July 3.

The band, who recently released their self-titled debut album (having changed their name, and line-up, from the previous Agent), will join popular London prog rockers Sumer and Australia headliners Voyager on the bill.

"We have been big fans of Voyager since we toured with them on their last UK tour - they are a real force to be reckoned with live with talent to burn," the band told Prog. "It's great that we can share the stage with them once again and play some of our new material alongside them and prog powerhouses in Sumer!"

Voyager will also be playing at this year's Ramblin' Man Fair, UK Tech Fest and Bloodstock festivals over the summer, with other dates expected to be added, making it a concerted effort to crack the UK market.

Tickets for the show cost just £12.10 and are available to buy from the alt.ticket link here.