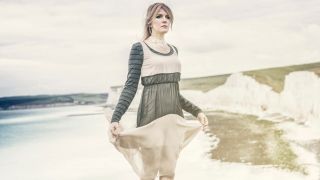 The track is taken from their forthcoming album, An Abandoned Orchid House, which is released through Sonicbond/Coven Tree Records on June 1.

“Chapel Bell is really that moment where you are literally on the floor and about to give up," Talitha tells Prog. "I took that idea of the little match girl who is lighting her matches in the wrong village and needs to go to a kinder one. It’s about coming out of the darkness during a really hard time or heartbreak and learning the things we want aren’t always good for us.

"I was living in an old Cottage at the time and hearing the bells of a very small and isolated Chapel nearby. I recorded the main part in the cottage on my piano to give it that sense of isolation. You can hear bit of delivery trucks going by in the raw files and the fire burning in the background."