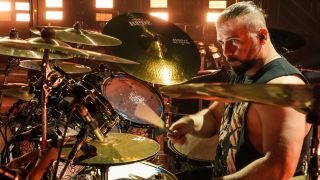 System Of A Down drummer John Dolmayan has released a cover of David Bowie’s Starman through his These Grey Men project.

The track will feature on These Grey Men’s self-titled debut album, which is set to arrive on February 28, with Starman featuring guest vocals from Dolmayan’s System Of A Down bandmate Serj Tankian.

Speaking about his inspiration for the covers album, Dolmayan says: “While I was driving, I’d put on satellite radio and listen to whatever came on.

“Often, I’d hear something and ask myself how I would play or arrange it. I actually started to make a list of about 30 songs I might cover someday. I just got inspiration from desert driving and listening to music.

“System Of A Down wasn’t making music at the time, but I needed an outlet for my artistic energy. So, I whittled down the list and reached out to some artists I wanted to work with.”

Tankian also appears on album opener Road To Nowhere, while other guests include Rage Against The Machine’s Tom Morello and Avenged Sevenfold frontman M Shadows.

System Of A Down will play two shows with Korn, Faith No More, Helmet and Russian Circles at the Bank Of California Stadium in Los Angeles on May 22 and 23. They’ll then head over to Europe for further performances, including a headline set at the UK’s Download festival.

These Grey Men: These Grey Men
System Of A Down drummer John Dolmayan's These Grey Men project will release their debut album at the end of February. The record will feature guests including Serj Tankian and Tom Morello.View Deal