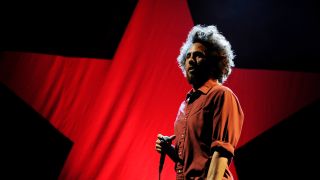 At the beginning of the 1990s, sociologists turned their gaze upon a new generation of teenagers and young adults and identified this emerging social group as ‘Generation X’, a label lifted from Canadian novelist Douglas Copeland’s 1991 best-seller Generation X: Tales For An Accelerated Culture. Extrapolating upon the attitudes and social manners exhibited in Copeland’s book, in Texan film director Richard Linklater’s award-winning indie sensation Slacker, and in 1991’s most talked-about album, Nirvana’s Geffen Records debut Nevermind, cultural commentators argued that the youth of the 1990s were cynical, apathetic, self-centred and jaded, over-educated, under-employed, disillusioned and politically disenfranchised. And then four young men from Los Angeles released the most confrontational, provocative, politicised and impassioned rock album of the decade and blew every lazy, clichéd, prejudiced assumption about their generation away.

As a musical guerrilla cell, Zack de la Rocha, Tom Morello, Tim Commerford and Brad Wilk were determined to make a difference. A multi-racial, outspoken, combustible collective, Rage Against The Machine were not the first band to seek to meld the worlds of hard rock, punk and hip-hop, but in their assimilation of influences from Led Zeppelin (riffs, dynamics) Public Enemy (polemics, production), The Clash (imagery, integrity) and Gil Scott-Heron (rhymes, radicalism), the quartet fashioned an explosive cocktail generating shockwaves which would be felt across the globe.

Released six months after the ferocious riots which engulfed their hometown, their self-titled debut album is an incendiary, revolutionary call to arms which encouraged independent thought and radical deeds. With sleeve artwork featuring the Pulitzer Prize-winning photograph of the self-immolation of a Vietnamese Buddhist monk, in Saigon in 1963, the 10-track album dealt with inner-city violence, poverty, racism, corporate malpractice, the abuse of power, institutionalised discrimination, lies, injustice and oppression. And while reading like an epitaph for the American Dream, it sounded thrillingly like a manifesto for new world disorder. Here, finally, was a band to believe in.

In form as well as content, Rage Against The Machine represented a finger in the face of conformity. When they appended the line ‘no samples, keyboards or synthesisers used in the making of this record’ to their debut album’s sleevenotes, it was both a kiss-off to the slick, polished sound of ‘80s rock, and an invitation for listeners to steel themselves for a new, innovative musical palate that would revolutionise rock. Tom Morello’s guitar tones occupy a sonic space somewhere between ‘police siren’ and ‘ticking time bomb’, whirring and churning in perpetual attack mode, while de la Rocha spits righteous, incandescent bars like a street-corner preacher, midway between poetry, prophecy and pre-apocalypse threat. Allied to the spacious, hard-funk rhythms assembled by Commerford and Wilk, this sound and fury created a fresh, electrifying musical vocabulary which would give voice, in years to come, to everyone from Deftones and System Of A Down to Muse and Gallows.

Evidence that RATM were not content merely to be a musical force however was evident in the ‘Thanks for Inspiration’ section of their debut album’s sleevenotes, which gave shouts out to Black Panther leader Huey Newton and IRA hunger striker and elected MP Bobby Sands alongside musical activists/artists such as Fugazi’s Ian MacKaye, The Clash’s Joe Strummer and Public Enemy frontman Chuck D. In his sleevenotes to the 20th anniversary re-issue of Rage Against The Machine, Chuck D, soon to be found fronting Prophets Of Rage, hailed the quartet for providing a soundtrack for “rebellion for the underclass”.

In their original decade together the band championed numerous causes for social justice, whether it was Harvard graduate Morello forming the Axis Of Justice with System Of A Down frontman Serj Tankian or de la Rocha working on the ground with the Marxist Zapatista rebels in Mexico or donning a suit and tie to appear before the United Nations’ Commission on Human Rights In Geneva to call for a new trial for Mumia Abu-Jamal, the journalist and former Black Panther who spent 30 years on Death Row after being convicted, controversially, for the 1981 killing of a Philadelphia police officer. Critics may have sneered at the band’s fervent belief that music could empower, educate, and effect change, but the quartet were always prepared to translate sloganeering into grass-roots activism – their determination and faith perhaps best illustrated in de la Rocha’s lyric on Guerilla Radio: ‘It has to start somewhere / It has to start sometime / What better place than here / What better time than now…’

For a decade, Rage Against The Machine were untouchable as the most powerful and important rock band on the planet, uniting metal, punk and hip-hop fans to their cause. Over the course of three albums – that peerless 1992 debut, 1996’s Evil Empire and 1999’s The Battle Of Los Angeles – they created a body of work that sounds as potent and inspirational as it did upon its initial release, then bowed out with a covers album, 2000’s Renegades, which in showcasing songs by Bruce Springsteen, Bob Dylan, Minor Threat, MC5, Afrika Bambaataa and Eric B. & Rakim amongst others, served as the perfect gateway for rock fans to check out the artists who laid the blueprints for their sound and vision. Their reunion from 2007-2011 was unimpeachable, both a victory lap for their pivotal role in taking ‘alternative’ rock into the mainstream, and an acute reminder that the issues which fired them a decade earlier remained both relevant and unresolved. That, en route, they managed to give a bloody nose to Simon Cowell, via an internet-driven campaign to install Killing In The Name as the UK’s Christmas Number One single in 2009, was a nice bonus, “a wonderful dose of anarchy” as Tom Morello recalled.

The impact of RATM still resonates with power and clarity in modern music: their legacy lives on in Refused and Against Me!, in avowed fans such as System Of A Down and The Prodigy, in Kendrick Lamar and Death Grips, in any artist who’s raised their voice to say ‘Fuck you, I won’t do what you tell me.’ Rage Against The Machine may be no more, but their music, spirit and soul lives on, uncompromising and uncompromised. A voice for the voiceless, they shall never be silenced.

The 60 Second Rage Against The Machine Quiz