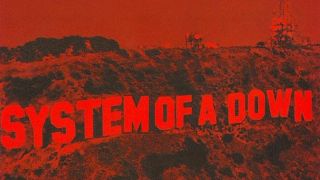 It’s safe to say that everyone knows where they were on September 11, 2001, the day the world changed forever. System Of A Down bassist Shavo Odadjian was at home in Los Angeles, packing his things and mentally preparing for the band’s upcoming Pledge of allegiance tour with Slipknot.

Shavo’s phone was ringing off the hook, but he ignored it at first, too busy to take calls. When he finally answered it, it was his mother telling him to turn on the TV. He turned it on just in time to see the second tower of the World Trade Center fall. then his other phone rang. this time it was his manager saying that System Of A Down’s new album, Toxicity, had debuted at Number One on the Billboard charts.

“I heard that at the same minute that I heard 9/11 was happening!” he says today. “So it was such a bitter-sweet moment.”

Both of these things were a shock in their own way – one huge, one smaller but still significant for Shavo and his bandmates. America does not get attacked on its own soil. And weird Armenian metal bands do not get to Number One in the charts. Although in hindsight, everything was lining up in their favour.

System had done the groundwork with their brilliant, self-titled debut of 1998. They were a buzz band, rapidly gaining attention and steadily moving to bigger venues. their growing army of fans was keen to hear what they’d do next.

“The pressure was on,” admits Shavo, “but Daron [Malakian, guitarist] had a lot of songs written and I had some songs, and we were just ready to get in there and make another record. It was exciting, because with the first record we didn’t over-produce it, we made more of a punk rock recording and you can tell with the difference of the recording. But we did that so we’d have somewhere to go with the second one and the third one. We were looking forward to getting in there and using more of the board, doing more guitar tracks, y’know? and we spent more time in the studio with Toxicity than we did with the first one.”

In pre-production alone, the band wrote 35 songs that would eventually be spread out between Toxicity and 2002’s Steal This Album! They also brought in a wide array of instruments, including sitar, banjo, piano, keyboards, and an Armenian Oud, a lute-like instrument.

“Yeah, Daron was in there like a maestro,” grins Shavo. “I mean, a band is a team and you let people do what they’re good at, and then you complement them with what you’re good at. Everyone gave what they gave, but he did so many guitar tracks and instruments, he was like a kid in a toy store! With Toxicity, Daron really came through and shined. Also Serj [Tankian, vocals] had a lot to do with the vocals and it wasn’t like normal takes.”

When Shavo says this, he’s not exaggerating. The singer went to unusual lengths in an effort to take his already unique vocal style into completely different areas. The band partly recorded the album at producer Rick Rubin’s house, and at one point, Serj set up a tent in Rubin’s studio and sang inside it. Another time, he decided to literally turn things on their head.

“Rick had one of those exercise things,” says Shavo, “so they hung Serj upside down and he did some tracks.”

This maverick approach was the compass by which the whole band steered the album. They paid little attention to what anyone else might want – a masterstroke in hindsight. “There was no saying, ‘Are we gonna be good enough?’” says Shavo. “We were just doing what we do, and if we ever thought about whether people would like it we’d never do what we do. We never thought people would like our style, and we never did our style for the radio because they weren’t playing it at all.”

The clues that Toxicity would become one of the blockbusting metal albums of the early 21st century were there even before the album came out. Having completed the record, System arranged a free promotional show in a parking lot on Hollywood’s Schrader Boulevard on September 3, 2001, the day before the Toxicity was due to be released.

The place could hold around 5,000 people, but it was Labor Day, a public holiday, and there were more like 15,000 fans flooding the streets. The fire marshal in charge closed down the show. Predictably, the audience were none to happy and promptly rioted.

“I remember being in the back with my family,” says Shavo, “and I was worried because my little brother and his friends were in the crowd and we heard all this rioting going on. I kept pleading with the fire marshal, like, ‘Just let us go out there and play three or four songs’ but he was like, ‘No, you can’t do it.’”

At the exact same point, the authorities decided to take the band’s stage banner down and all hell broke loose. “The kids went crazy – they started destroying our equipment and gear, and we had to get a police escort out of there,” says Shavo, who estimates that more than the damage to their equipment totalled $30,000.

The band were given a police escort to the nearby hotel for their own safety. There, they were treated to the surreal sight of watching the riot that was happening just a few blocks away unfold on TV.

“We were on the news on every channel,” says Shavo. “They had shots from above where we were supposed to be playing and there were people fighting with our crew. My bass tech was throwing fists trying to protect my gear and there’s people swinging at each other. A pipe hit one of our guys in the face and broke all his teeth. It was crazy.”

Little did the band – or the fire marshal – know, but it all helped raise System’s profile. “The press went crazy with it, so our little band became a bit bigger,” laughs Shavo. “It was, like, ‘This band of Armenians are causing a riot in LA and they have an album coming out tomorrow.’”

But if System Of A Down were big news when they released the album, they were even bigger news when it went to Number One, though not necessarily for the right reasons. Within the space of days, they began notching up airplay for the track Chop Suey!, only to find it dropped by radio stations who found its lyrical references to ‘self-righteous suicide’ and dying angels too near-the-knuckle in the wake of 9/11. And then things started getting really weird.

“They said the whole album was related to 9/11,” reveals Shavo, “and there were questions about the song Jet Pilot because they said it was a premonition. I mean, there was some crazy news! Everyone started noticing us and because they thought Armenia was Middle Eastern they were like, ‘Oh my God! They’re one of them!’ There was a lot of weirdness.”

This hysteria had a very real impact on System Of A Down. They decided to postpone the tour in support of Toxicity. When they did finally hit the road, they still encountered some resistance. At a show in Grand Rapids, Michigan, Shavo was allegedly attacked by a security guard after the show.

“I was trying to get backstage,” he says. “I had my pass on, and they still kinda beat me up and threw me out of the arena. I’d just gotten offstage, but these motherfuckers just didn’t like me for whatever reason. It was a stressful time.”

Despite the stresses and weirdness, Shavo looks back on Toxicity as a key point in System’s career. It turned them from a brilliantly maverick outfit into genuine world-beaters. Toxicity itself went on to sell 12million copies worldwide, while its songs – Chop Suey! among them – are staples of rock radio stations across the globe.

“Some of the songs are songs that people grew up with and that’s crazy to me,” says Shavo of Toxicity’s legacy. “It also made a lot of people try playing music and experiment more. It made them more creative and it made them artists, and that’s really important to me. If you inspire someone then you do something right. It made it OK to sing and scream and talk, to play hard and to play soft, and that’s OK because that’s life. Life has every emotion.”