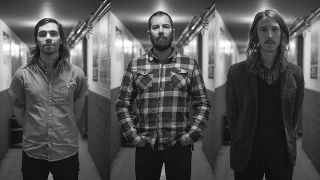 “I’d rather be called a prog band than a post-rock band, to be honest,” says Mike Sullivan, Russian Circles’ guitarist and principal songwriter. He’s on fine form as he describes his complex feelings about the trappings of genre tags. “It’s interesting to see that post-rock has so much traction these days. I just hope it’s not becoming too singular and defined, because it’s cooler when it could be anything, you know?”

As Sullivan cheerily recounts his discovery of instrumental post-rock, a glass chinks – he’s relaxing today, having been involved in a head-on car collision that resulted in the cancellation of a couple of tour dates.

“I remember we were on tour with Red Sparowes and I was talking to Cliff [Meyer], who’s been in [legendary post-metal band] Isis before Red Sparowes, and I was like, ‘Hey man, what is post-rock? I keep hearing about this shit,’ and he replied, ‘It’s this, man. Look around!’”

Russian Circles’ new album Guidance is a progressive powerhouse of post‑rock and post-metal atmospherics, riffs and soundscapes, and it sees the band – who are completed by bassist Brian Cook, formerly of Botch and These Arms Are Snakes, and drummer Dave Turncrantz – moving into slightly unusual territory, riding triumphant major key melodies as well as their trademark minor key catharsis.

“It felt weird sometimes that some of the songs were so major key melodic, with not as much melancholy to them,” admits Sullivan. “That kind of sketched me out. Then I was like, ‘Hey, we wrote this, this is happening…’ It’s part of what we are, being ourselves. If some of the songs aren’t as dark and brooding, that’s more honest.”

As a result, Guidance is a self-assured record that’s not afraid to break with the past and take the band away from some of the extreme metal subgenres they’ve been associated with. This makes sense because by the time they hit their darkest point, on the track Lebaron from their unforgiving but brilliant last LP Memorial, it was hard to see how the band could have got any heavier, either in timbre or in mood.

For several records, it felt like Russian Circles had been testing the boundaries of how far they could take their metal influences, and on Guidance, it was time for a change.

Sullivan tells us: “Burial [from Memorial], not to be genre‑specific, but that’s a more death metal type groove. But there isn’t a whole lot of texture beneath that, supporting the main riff. I think we took that idea and said, ‘Okay, we can still have these dark riffs, but we need to tuck a melody beneath it to make it stronger.’

“I think that’s what happened with Vorel [the lead single from Guidance],” he adds. “Each main anthemic riff has a lot of melody tucked beneath it that’s different from the main riff you’re hearing.”

Surprisingly, there hasn’t been a sea change in influences or something external that could directly explain the difference between Memorial and Guidance. Sullivan says: “I’m sure our influences do change, but thanks to the span of how long it takes to accumulate the riffs, you go through phases of listening to a lot of metal, or a lot of ambient music, or classic stuff, or folk music, so that in each year, you cast your net a little wider and get more and more to draw from, so it’s a natural growth that occurs.

“If you get into one band then that can be dangerous. If you love one band too much then you end up pushing out tunes that sound just like them, unintentionally, and that can be unhealthy. Anything that I’m too into, I’m reluctant to pursue stylistically.”

With Kurt Ballou of Converge fame taking the helm at the console, rather than long-time producer Brandon Curtis, formerly of Secret Machines, one might have expected a drastically heavier album. However, Sullivan says Ballou’s influence was felt in other ways, as he pushed them to experiment and nail the tones they wanted in the studio.

The writing process for the record was similar to their previous efforts as well, with the major change being that Brian Cook contributed more heavily to the songwriting.

“Brian was more helpful, as far as producing songs and whatnot,” says Sullivan. “He wrote the first song [Asa] – that was all him, we just filled it in. It was cool having him helping out in the writing department.”

As for the record’s gestation period, Sullivan reckons, “It didn’t take long to write – we spent some time accumulating riffs, and then Dave and I started compiling, seeing which part works where and what sounds cool together. This has been the easiest record to arrange. Usually there’s a lot of ‘I don’t know…’ where one person is feeling something and another person isn’t quite there. For this, we were all on the same page.”

As a result, new riffs and ideas are still accumulating, meaning Sullivan is already looking towards what the band will do next. Although there’s no immediate pressure, a desire to continue to innovate with their sound is at the forefront of his mind.

“A lot of it is about how to use melodies and how to arrange songs to have more depth in each melodic element – supporting it with a different harmony, or having a drone behind it that blends differently. You use these devices to write stronger songs that you’re more satisfied with.”

A chief concern has been focusing on more subtle ideas, that are maybe “tucked in the mix and creep up later in the song”. Using the example of the thread of extreme metal that’s perceptible in their music, Sullivan explains, “We started messing with black metal stuff a few years ago, from [2009’s] Geneva on, and we weren’t really comfortable with how to manipulate that into the songs. Now I feel we’ve grown with that, and that’s an example of fleshing things out, while at the same time not having it sound just like black metal, y’know? Making sure the drums and bass are all different so it’s not black metal… finding a nice groove on bass and drums that mixes with the guitar to make it more than just another black metal riff.”

Above all else, it’s clear that the members of Russian Circles are all huge fans of music, and all that comes with it. And so far as he can define it, Sullivan is pretty clear about what he values the most: “It’s something that will never go away. It’s something that’s in you and you always have something to say. Once a record is finished, your mind is already on what comes next, y’know?”

A prog fan’s introduction to Russian Circles’ back catalogue.

Russian Circles are no longer young upstarts, and working through their previous five albums is a formidable task. Now one of the biggest instrumental bands in the world, they’ve got this far through a mix of hard work and a curious ability to make otherwise niche and aggressive instrumental techniques and styles attractive to a wider audience.

If you’re no stranger to post-metal then the first port of call should be 2013’s critically acclaimed Memorial, a dark, heavy and cathartic listen that not only features arguably their most punishing riffs, but also some of their most melodic and beautiful work to date.

A fan favourite live, the uplifting and sprawling Mlàdek from 2011’s Empros is a good place to start investigating their earlier albums. Hinged on a repeated, tapped figure that’s looped through a pedal and then built upon, it showcases both Sullivan’s love of Van Halen as a teen and the influence felt on their music by post-rock pioneers like Tortoise and math‑rockers such as Don Caballero.

The Russian Circles sound, however, was actually set on their debut LP, 2006’s Enter. On Death Rides A Horse, Sullivan uses tapping to form the outlines of chords while using drone notes and strategic stabs of the bass strings to sound like there’s more than one guitarist playing. It’s thrilling to watch live, but equally as spine-tingling on record, as notes frantically cascade from the speakers.

The albums Station and Geneva dial back the technical excesses and bring many more atmospheric elements to the band’s sonic palette, but this is ground zero for Sullivan’s signature guitar style.