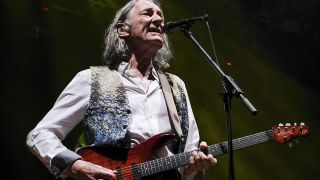 Supertramp co-founder Roger Hodgson has announced he’ll tour across the UK next summer – a run of shows which will include an outdoor show at London’s Royal Hospital Chelsea.

The performance on June 13 will be part of Hodgson’s Breakfast In America tour, with the set part of the annual Live At Chelsea Concert Series.

A statement reads: “There is a reason fans travel from around the world to see Roger live in concert again and again. Come experience a show that will stay with you for days, if not weeks.

“See Roger, the singer, songwriter performing his songs that are as popular today as when they were released: Breakfast In America, Give A Little Bit, Take The Long Way Home, Dreamer, The Logical Song, It’s Raining Again, School, Fool’s Overture and so many more.

“Spread this fantastic news and make plans today with friends and family to come to a show – or two!”

Other artists for the sixth edition of the Live At Chelsea Concert Series will be revealed in due course.