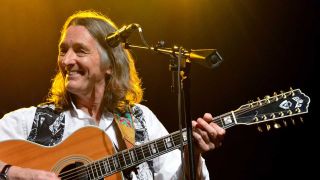 My teenage years were a very fertile period for me. Ever since I inherited my dad’s guitar at age 12 music was my total focus, it’s what got me through boarding school. I remember running to the music room at school in between classes and playing a few chords until the next class started. I had a passion for music and put my heart and soul into it, so I would say my creativity at that time came from my “passion of youth.”

Some of the biggest hits I recorded with Supertramp were songs I’d written in my late teens. Songs such as Dreamer, It’s Raining Again, Breakfast in America, Two of Us, Soapbox Opera, Give a Little Bit and even the beginning of Fool’s Overture, were all written during that fertile time period. These songs are my babies and I still enjoy playing all these songs in my concerts today.

It means so much to me as a songwriter and a composer to have written songs that have stood the test of time.  I believe when you access that place of sincere feeling, whether it’s joy or sadness or loneliness or betrayal or longing for a partner or longing for God, it’s a universal language. When I get my mind out of the way and allow the divine, my heart and my soul to come through people feel it and identify with it because it’s also expressing feelings that are in so many people’s hearts and souls.

The Logical Song was born from my questions about what really matters in life. It was a very personal lyric for me. Throughout childhood we are taught all these ways to be, and yet we are rarely told anything about our true self. We are taught how to function outwardly, but not guided to who we are inwardly. We go from the innocence and wonder of childhood to the confusion of adolescence that often ends in the cynicism and disillusionment of adulthood.

In The Logical Song, the burning question that came down to its rawest place was 'please tell me who I am.’  I think in these modern times, the more complex life becomes, this eternal question becomes ever louder - which is why the song continues to strike such a deep chord with people around the world.

Breakfast in America is consistently one of the most popular songs in the set and it just seems to ignite a wave of joy in the audience when they hear the first chords.  I was dreaming and having fun one day and this song just flowed out. I think the lyric was written in about an hour, it just came out of me.

Never could I have imagined when I wrote this song at age 19 that it would be gaining in popularity, if that is even possible, over 45 years later. It has that magical playful, fun, jubilant quality that people love to hear and sing along to. ‘Could we have kippers for breakfast, mummy dear, mummy dear.’

Give A Little Bit

Even at an unwizened young age when I wrote this song, I saw that the world needed love. I believed in love – it was always for love – and I just felt that was the most important thing in life. This song has really taken on a life of its own, and I think it’s even more relevant today than when I wrote it. Because we really are needing to value love in a much deeper way, and also we’re needing to care. There’s a spirit in the song that touches people and a magic that comes out in myself and in people around the world when I sing it. It's just one of those songs... that has a profound and beautiful message, which is give a little bit and show you care.

I know it's giving that makes me happy, and I'm very fortunate to have a gift that makes people happy. The song is characterised by the ringing tones of the 12-string guitar. It is always heartening to see people at the end of the show with their arms around each other and singing along.

Take the long way home is a metaphor for the universal journey of self-discovery.  The song is a vehicle for reflection in which the sometimes disappointing realities in our grown up lives can reflect in a not so positive way on the hopeful idealism of our youth.

To me, home can be translated a number of ways. You can literally take the long way driving home to your house or to our true home. It's like going to where we are all heading in this journey called life and a question that burns deep inside of me: Which is where is my home? Where is peace? And often times it feels like I'm taking a long way to find it.

A lot of my songs have multi-levels and the deeper meaning to this song is about taking the long way home to our true home, that place of real connection inside our heart.

With the song Dreamer, I was sitting at the keyboard in my mother’s house and it was something that just flew out of me. I just sang words and the words that came out were very close to what’s in the final song. I was banging boxes and light shades and I created this magical demo.

Four years later we tried to record the song and weren’t coming up with the same magic. So we put the demo on 2 tracks and played to it and tried to copy or duplicate or re-create a lot of the sounds on the original tape. I love playing this song in concert because it seems to bring out the dreamer in everyone.

Fool’s Overture is one of my favourite pieces that I've ever written. It was very magical the way it came together. It was actually three separate pieces of music that I had for a few years and then one day they all just came together in what I think is a magnificent, kind of epic piece of music.

I always imagined performing it with an orchestra, so when I did start playing with orchestras back in the '90s, it was such a thrill to play this song. I still get goosebumps to this day every time I get an opportunity to do that.

Hide In Your Shell

I was 23 when I wrote that song, confused about life and like a lot of people are at that age, I was very shy and tried to hide my insecurities. I’ve always been able to express my innermost feelings more openly in song, and Hide in Your Shell came to me at a time when I was feeling very lonely – with no one who shared my spiritual yearnings.

It’s a song that speaks to that place in all of us that feels alone or misunderstood, that place where we just want to hide from the world, that longs for connection yet doesn’t feel safe to reach out for help. People often write to me and say that this song in particular strikes a chord in them and that people are able to relate to it.

I wrote It’s Raining Again on a day when I was feeling sad because I’d lost a friend. I was in England looking outside the window and it was pouring rain and literally, the song came to me. I started playing these chords on this pump organ and I just started singing It’s Raining Again.

The first version of it was much slower and more melancholy and then when I recorded it with Supertramp I decided to increase the tempo and it was more upbeat. So it’s another of my songs with a sad lyric set to up upbeat melody.

It's a longing cry for whenever you are going through a stage in life, where you feel like everything around you is coming apart and the best place to be is in your center, to really rest inside the eye of the storm and in that nakedness and that vulnerability.

It's like you're reborn into a whole new way of life, a whole new aspect of yourself. It's very much like a new beginnings song.

It’s basically saying that what they teach us in schools is all very fine, but it’s what they don’t teach us in schools that creates so much confusion in our being. They don’t really prepare us for life in terms of teaching us who we are on the inside. They teach us how to function on the outside and to be very intellectual, but they don’t tell us how to act with our intuition or our heart or really give us a real plausible explanation of what life’s about.

School is one of those songs that really does take people back to their high school or wherever they were when they first heard it. It kind of has a spellbinding effect in my concerts today.