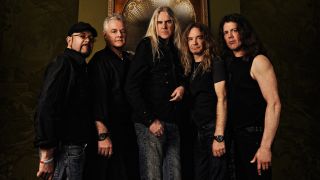 Saxon have released a live video of their performance of Battering Ram – the title track of their 2015 album.

The clip is lifted from Biff Byford and co’s live package Let Me Feel Your Power which launched across Europe this week and will be issued in North America on October 28.

Let Me Feel Your Power features material recorded in Munich and Brighton, along with bonus material taken from a Chicago show from September 2015. It’ll be the NWOBHM veterans’ 10th live album. They previously issued a clip of Wheels Of Steel.

Let Me Feel Your Power is available in several formats, including DVD/2CD, Blu-Ray/2CD, digital download and a deluxe vinyl version which also includes the Blu-ray and 2CD, and is limited to 1500 copies.

The band are currently working on the follow-up to Battering Ram, and are eyeing a summer 2017 release for the as-yet-untitled album. It’ll feature the track They Played Rock And Roll, which frontman Byford recently reported was a tribute to late Motorhead leader Lemmy.

He said: I’ve finished the lyrics for that, and it will make the album. I asked bassist Nibbs Carter to write me a song that was similar to Motorhead, and he did. I just put some lyrics to it and that’s how it came about.

Saxon will head out on tour across Europe later this month, kicking off the run of shows with 10 dates in the UK and Ireland. Former Motorhead guitarist Phil Campbell and his new outfit The Bastard Sons will join them on select dates.

Saxon’s Glockler: Lemmy was ill but he worried more about me