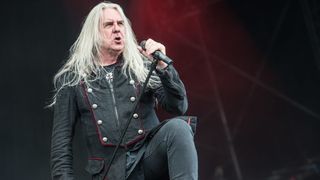 Having cut his teeth in the clubs of northern England with the band Coast before co-founding Saxon (née Son Of A Bitch), Peter ‘Biff’ Byford has been making records for 37 years.

If you have him tagged purely as a heavy metal guy, you’re wrong. From the darkness of The Velvet Underground to the Sex Pistols’ snottiness and the relative beauty of Wishbone Ash and Yes, these are the 11 records – Byford has chosen a mix of singles and albums, presented here in no particular order – that served to make the 65-year-old the man he is today.

This was one of the first singles I ever bought – at Woolworths, I think. I used to go down there because they had record listening booths, but before that I could have heard it on the radio or something. Radio Caroline, perhaps? But the sheer explosiveness of that riff was enough for me… I went out and bought it.

That album was such a big influence on me; it was played a lot on the eight-track in the transit van as we travelled to gigs. We liked it, it was mega. The songs were great, it had I’m Waiting For The Man and Sweet Jane on it, and it was really dark.

It was their sixth album, I think, the one before We’re An American Band. There used to be a jukebox in one of the Sheffield pubs that I frequented, and it had lots of great tracks by what were then quite obscure American bands. We spent a shitload of money on playing Grand Funk Railroad and Black Oak Arkansas, but especially Grand Funk.

You can’t beat a bit of early Mountain. I saw them play a club in Birmingham, the name escapes me, but it was very early in their career. Climbing! has so many great songs, including Mississippi Queen, Never In My Life and Theme For An Imaginary Western, it’s great.

This one’s a no-brainer. It was the first time I’d ever heard any band play that way; Deep Purple weren’t the same as Led Zeppelin, they were unique. Though I don’t recall the year it happened, I saw Purple playing with Uriah Heep at Sheffield City Hall… which brings me to my next selection.

Of the two bands, I actually preferred Uriah Heep over Deep Purple in their early days. I liked the style and imagery, and of course David Byron was a very charismatic singer. That Roger Dean sleeve made for great packaging, and it had my favourite of their songs, The Wizard.

From Uriah Heep to the Pistols is a big leap, but I listened endlessly to Never Mind The Bollocks because I loved the guitar sound. I don’t know if it came out that way on purpose or by accident, but it’s such an exciting album. I saw the Pistols live. We used to play the same circuit as them. Often we’d arrive at a venue they’d played the night before and find it completely wrecked, chairs all over the floor.

I like their first one because Jimmy Page’s guitar playing is so bluesy. I know they ripped off a lot of old blues people and changed the titles to their songs, but even so… Led Zeppelin is a great album; it’s how blues music should be played.

I like pretty much all of the Yes albums but Close To The Edge is my favourite because it blends great songs with great playing. It really sticks out because it only has three tracks, the title track being a whole side long in the days of vinyl. Yes were at their peak with Close To The Edge, it featured their classic line-up before all of the many changes they went through. I loved Chris Squire’s playing; that really influenced me because I was a bass player as well as a singer back then.

I’m choosing Paranoid the single, not the album. Everything they did before that and the rest of the Paranoid album were really doomy. I liked the fact that Paranoid, the song, was singalong-able… if there’s such a word. I can’t explain why I liked it so much, it just stood out for me as a serious attempt at writing a great rock song that could be played on the radio.

I loved the track Warrior, but it was an excellent album throughout. There was a loose concept or thread behind Argus. The melodic aspect was extremely important, too. Wishbone Ash are among the pioneers of twin guitar rock music, they were doing it before Thin Lizzy came along. They’re the originators of that style, and Argus is sublime.